I really wanted to do an outdoor photo shoot for this FO, but I couldn't wait any longer. You'll just have to deal with my parents' living room as the backdrop. 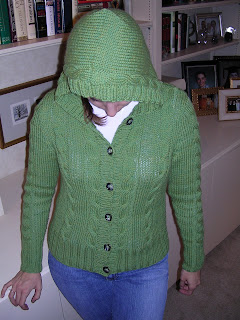 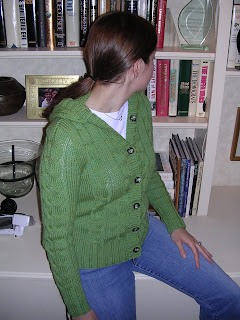 I am absolutely in love with this sweater. I think it says a lot about a pattern that as soon as I was finished I wanted to knit it again.

There are several things I'd change if I knit this sweater again, however. The first thing would be to knit the next larger size. I knew that others who'd knit this sweater had found it to run small, but I wanted a fitted sweater, so I knit my normal size. It fits perfectly, for the most part, but as you can see in the photo below, the lower arms are a little snug. I have the pull the sleeves on, but once they're on, they're not uncomfortable. I wore this sweater all day and didn't really notice. Still, it would be nice to be able to wear a looser shirt underneath the sweater and to have a little more room.

The other thing I'd change is the decreases on the hood. It bothers me that they're not centered, and that's a little apparent because of the fact that I grafted the hood stitches instead of binding off and seaming it. Next time, I'll adjust the decreases so that they are actually in the center of the hood. 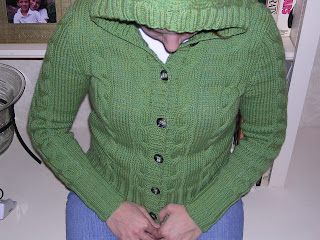 I used almost every bit of five skeins of Cascade, which was really quite amazing, in my opinion. That included a swatch (which thankfully gave me spot-on gauge on the first attempt) and yarn for seaming; there's a little left over for repairs or reinforcement if needed in the future. Once again, it proved to be the perfect yarn -- great color, great yardage, great stitch definition. I still have five more skeins of this same color in my stash, along with five skeins of a shocking pink that was in the same WEBS order.

I used six buttons, all sewn on with sewing thread and then covered with a bit of yarn (somehow I must've had the subconscious foresight to buy buttons with extra-large holes). 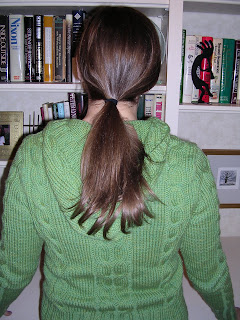 This sweater marks an important step in my sweater-knitting career: With this sweater, I officially conquered my fear of the set-in sleeve. These sleeves were the easiest to sew in of all the sweaters I've knit so far, but getting them in perfectly on the first try was a huge confidence boost. I swear that from this moment forward, I will not be scared of sweaters with set-in sleeves!

Now that this is finished, I will turn my attention to The Mister's sweater, which has been languishing for quite some time. It might not be as fun a knit as the CPH, but at least there will be no seaming to deal with at the end. And finishing his sweater means I'll allow myself to cast on for the next sweater for me!
Posted by Sarah at 9:40 PM