Do not adjust your monitor -- these are indeed the most boring socks ever. They are black and they are stockinette, and they took freaking FOREVER to knit. But the recipient will love them. 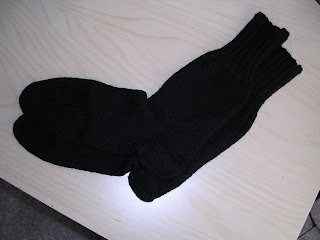 I'm not sure there's much to say about this pattern, as I've knit it so many times before. It's my go-to stockinette pattern for J, so he gets a lot of them. Normally I'm not one to mind long stretches of stockinette but knitting these was almost interminable for one simple reason: I hated the yarn. It was rough and scratchy and snagged on itself. I know it will soften up with a couple of washings, but for now I'm extremely glad to be done with knitting it -- and it's now officially all out of my stash (I'd bought four skeins of it back when Pittsburgh Knit & Bead was going out of business).

After finishing up the Socks of Doom, I had the urge to cast on for not one but two new socks. First up, for me, a little colorwork in the form of a modified version of Canada from Nancy Bush's Knitting on the Road: 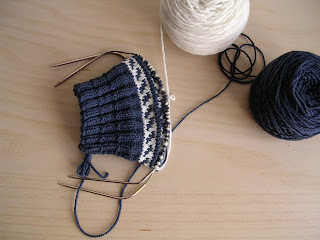 I'm using the Reynolds Soft Sea Wool leftover from Aidan's Red Sox sweater; it's delightfully soft and smooshy. Because I haven't photocopied the chart for the stranded portion, this sock makes for poor portable knitting, thereby necessitating casting on another sock to travel with me and be my work knitting. Not wanting to be selfish in my knitting, I thought I'd cast on another pair for J: 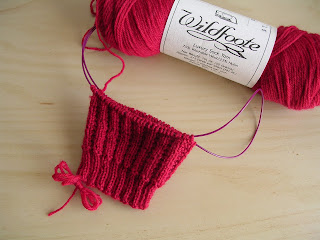 Look, it's not black! He'll occasionally let me knit him a non-black or non-gray sock; usually red is the default other color. As I've already knit him a pair of Plain Winter Socks in an almost identical shade, I had to find another simple yet easily distinguishable pattern. I settled on a simple garter rib worked over 68 stitches. Just enough variation from stockinette or a basic rib to not drive me batty, but simple enough that I won't mess it up as a result of nerves this week.

The socks I really wanted to cast on for are the ones in the August STR shipment, but I was too lazy to get out my swift and ball winder to wind the yarn. I did, however, photograph the gorgeous skein; the photo is now in my Flickr stream, for those of you who want to peek.
Posted by Sarah at 7:02 PM