I haven't blogged in a few days because I've been steadily knitting along on my current WIPs without much excitement, but I think I've made enough progress to warrant an update with pictures.

My Tangled Yoke Cardigan is coming along smoothly. I'm nearly finished with the first sleeve, so that should be done tonight and the second sleeve cast on. 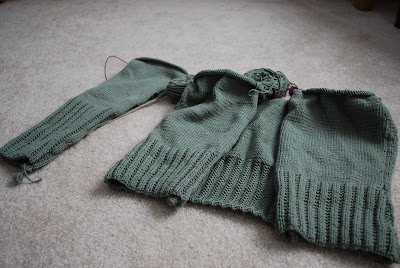 My lunch break knitting, since finishing the Lace Ribbon Scarf, has been Waves of Grain, knit with my own handspun. I'm just a handful of rows away from completing the first half, so the plan for tonight is to finish that up and cast on for the second half. 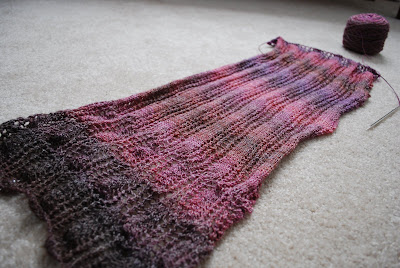 Meanwhile, I've been furiously spinning away on my merino/silk laceweight. I managed to finish off the first bobbin late last week and am probably halfway through the second. I'm anxious to finish this yarn, not only because I want to see how it turns out but because there's some spinalong fiber on its way to me from my favorite fiber pusher. 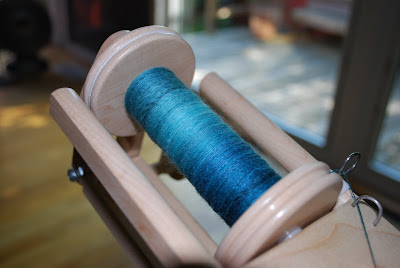 While I have been working diligently on these projects, I've been feeling a bit of ennui about my knitting in general lately. I'm not sure what it is or what's causing it, but it's been a bit of a cloud hanging over my head and has been keeping me from blogging as often as I like. I feel like there's not too much point in blogging when all I have to say is that I'm still working on a project and all I have to show for it is a progress shot that looks very similar to the last. So I may not be posting until I have something exciting or significant to show for a while, at least until I get my mojo back. In the meantime, if anyone has some good tips on how to chase the knitting blahs away, please feel free to share!
Posted by Sarah at 7:36 PM