I finished up a project last week that had no real purpose or intended recipient. I just felt like doing a little colorwork, and I'd had the pattern in my pattern binder for several years. Sometimes it's nice to do something just because. 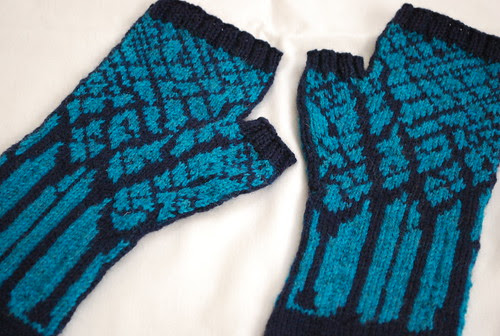 These were a fairly fast knit, but they took as long as they did because they were relegated to my lunchtime knitting at work, so only about 45 minutes or so on a good day.

I liked this pattern enough when it was a Knitting Daily freebie a couple of years ago to print it out, but to be honest I'm kind of meh about it now. I also have some weird puckering issues in a few places that didn't block out -- not because I didn't leave my strands loose enough, but from where I caught my floats. I think from now on I'll stick to colorwork patterns that don't require me to carry the non-working yarn for so many stitches.
Posted by Sarah at 3:35 PM