First up, there's the slouchy hat that I finished last Thursday night and modeled for Rainbow Friday morning (she took the photo, so you'll excuse the slight blurriness). 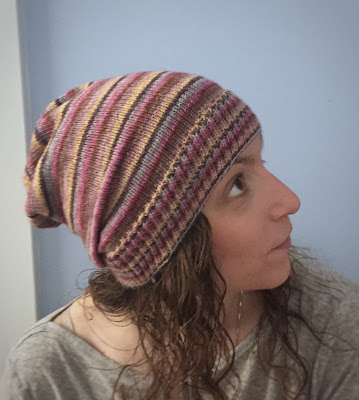 Using the Sockhead Slouch Hat as inspiration, I originally started this hat with a higher stitch count and had to rip it out and start over to make it smaller after knitting about an inch and realizing it would be much too big, even for a slouchy hat. This tells you just how much looser brioche stitch is than stockinette: Using US 0 needles and fingering weight yarn, I typically get about 9 stitches per inch in stockinette. Using the same needles and yarn but using brioche stitch, my gauge loosens up to about 7 stitches per inch. I don't own any needles smaller than a 0, so decreasing my total stitch count was the only option.

Once I'd gotten the right circumference, I knit brioche for two inches for the brim, then switched over to the larger needle and worked in stockinette until the hat measured about 10 inches. I did a fairly typical crown, with eight decreases every other round until just 8 stitches remained. Boom. Done. I still have to block the hat to get a tad more drape (in my experience, the fabric knit from this yarn gets soft and lovely the first time you wash it), but I'm quite satisfied with my new hat and predict it will get a ton of wear later this year.

I'm still working diligently on Rainbow's Little Boxy, using the same yarn base as my hat, but as it doesn't look all that different, I thought I'd hold off on taking a progress photo until it looks like I've made some significant progress. When I put it down last night, I had about 7 inches done on the body, and I believe I need to get to about 13.5 inches before I separate for front and back.

Finishing the hat meant I needed a new smaller project for my weekday lunch breaks, so I pulled out the leftovers from my sample for my Deco Lace Mitts and decided to try to squeeze out a pair of Rose City Rollers for me. I'm probably the last person on earth to knit this pattern -- better late than never, eh? 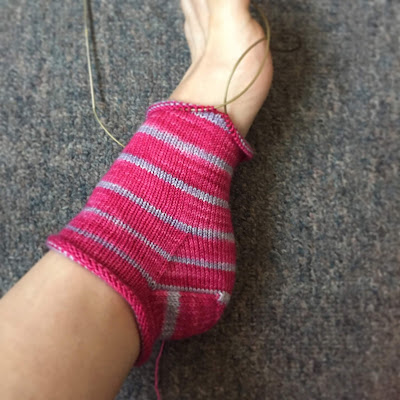 Technically I'm not exactly working from the pattern, as I'm knitting to a tighter gauge and using a stitch count between two sizes, plus I'm using my own stockinette sock recipe numbers for the heel and toe, but I guess it still counts? I did weigh the leftovers before I started (though of course neglected to write down what I had), and as one ball was slightly lighter than the other, I started with that one, figuring that if I could squeeze out a sock using the lighter ball I wouldn't have to worry about running out for the second sock. It's going to be close; the yarn in that ball is quickly getting used up, and I still have about an inch and a half of foot left to knit before I start the toe. I figure that if the worst case is that I don't have enough yarn to finish the entirety of the sock, I can always use some other scraps for the toe or even part of it. These are just for fun and just for me, and I couldn't care less about them being perfectly matching -- the yarn is already meant to be coordinating rather than matching, after all. I will say that knitting a shortie ankle sock is a ton of fun because it goes so fast, and Rainbow is already asking me for a pair of her own. So perhaps the leftover yarn from my hat will soon be some little person socks!
Posted by Sarah at 9:54 AM