Today marks the end of the 2020 edition of the Tour de Fleece. Although I was spinning throughout the event, I didn't really get into it as I have in years past. I didn't do any challenges and did even really check in on the TdF group on Ravelry. Instead, it was just another excuse to be at the wheel, but in reality I likely would have been at it anyway; I'm still finding spinning to be the most relaxing and most stress-reducing craft for these strange times.
But because I was aware that it was officially over today (also, incidentally, my brother's birthday), I made a point to have a goal of finishing up my current project. Luckily that wasn't too hard at all. Despite the fact that I didn't have a lot of time at my wheel yesterday -- we went for a family bike ride in the morning, and then I spent several hours cleaning and doing laundry -- I did manage to ply up the entire skein after finishing the singles Friday night. This morning I skeined it up and washed it, and it dried outside in about an hour thanks to some very hot weather (as I type this, the air temperature is 93F and the "feels like" temperature is 99F!). Here is what it looked like right after it came off the bobbin: 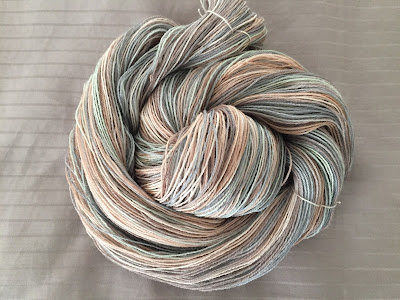 The fiber was the May shipment from the Southern Cross Fibre club, and for the first time since I've been a member of the club, it was a mystery wool. The pandemic has made shipping complicated; David has recently been unable to ship to certain countries, for instance, and many shipments are sent by boat rather than air now. These complications have also meant some supply issues, so for this shipment, he dyed the same colorways on a variety of wool bases that he already had on hand from previous shipments. He didn't keep track of what was what, though, so we only have a very general idea of what we got. I really can't guess what mine is, though I'm fairly certain it's not Merino or Bond, as it's not especially soft and did not bloom much at all when it was washed. Washing helped to even it out, but even after drying my skein hardly shrank -- it's measuring about 450 yards, which is quite high yardage for me. 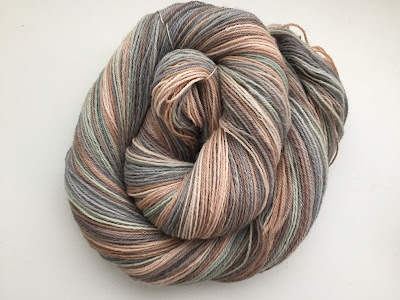 The dyed fiber was in very delicate pastel shades, and I wanted to keep them somewhat distinct but not have huge chunks of them, so I split the wool into four long strips and then spun them in succession. Then I chain-plied the singles. (For those of you who are not spinners, chain-plying is also sometimes called Navajo plying, but I dislike using that term; it's essentially creating a faux three-ply yarn by making a long crochet chain with the singles and then adding twist.) 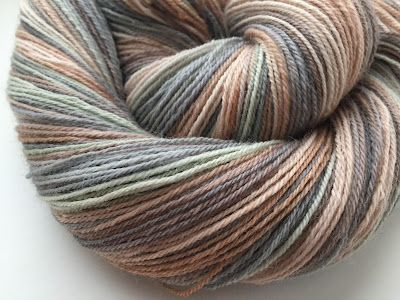 The colorway is called Pebbles, and it makes me think of the beach -- I can see sand and seagrass and shells and stones in these colors. My plan, assuming I can spin the rest of the fiber for it at the right grist, is to use this as the contrast color in a Tiny Dancer (Ravelry link). I have four bags of deep purple Rambouillet from David that I intend to use for the main color.
This was such a fast spin for me, in part because it was spun the way I normally spin and thus I didn't have to watch what I was doing, meaning I could spin and read an ebook at the same time. I've finished two books while spinning this skein!
Up next is what I hope will be the contrast skein to go with my fleece spin, which I can finally share a final photo of: 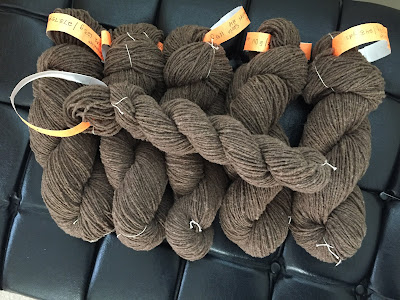 Rainbow and I went looking through my Ravelry library to see what sweater patterns I already owned that would work and I found Wild Grass (Ravelry link), which I think will be perfect. But of course all my yarn is one color, so I had to find something for the contrast. I found some handspun that was the right thickness, but Rainbow didn't like the combination of colors, so instead I am now spinning up some Merino that I inherited from a friend that I think will be perfect: 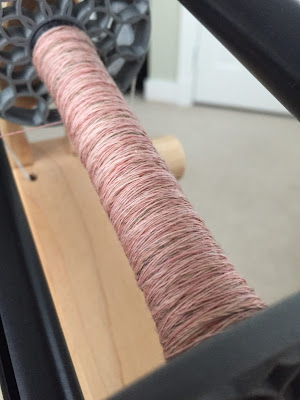 The color is getting toned down as it's spun, but the fiber is shades of pink with some spots of brownish green. I think it will be lovely and soft and will go very well with the woolen-spun Rambouillet. We'll see if I can keep up my pace and have it done and ready to share with you next week!
Posted by Sarah at 4:39 PM