Even though it's not one of my normal days for blogging, yesterday's post was kind of a special one (my monthly One Little Word check-in), and I still have some knitting and reading to talk about, so today I'm joining up with Kat and the Unravelers.
I have a big finish to talk about, too! 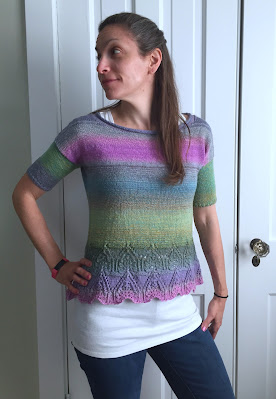 Pattern: Tegna by Caitlin Hunter, size Small/38 in. bust, with minimal ease
Needles: US 5 (3.75 mm) and US 4 (3.5 mm)
Yarn: This handspun; I used approximately 717 yards
Started/Completed: May 29/June 28
Mods: sleeve adjustment (see below)
I really could not be happier with how this turned out. It was so long in the planning (I started spinning the yarn way back in September of 2018) that it had the potential to be anticlimactic, but I'm really thrilled. And it turned out to be a pretty fast knit, too, considering that I was working on this at the same time as several other projects.
The only modification I made was to pick up several extra stitches for the sleeves, so I added some additional length to decrease those extra stitches and still get a good fit. The sleeves are fitted but not tight (I guess I should avoid doing too many bicep curls so that they continue to fit!). 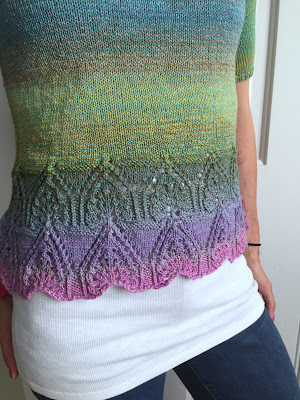 The planning I did to spin the yarn so that I had two very similar skeins worked out pretty well overall. I discovered as I was knitting that they were ever so slightly different in thickness, so I occasionally threw in an extra round using the thinner skein so that the colors would transition at more or less the same time. The tricky part in maintaining the colors, of course, came when it was time to do the shaped portions of the front (the right and left of the neckline) and the sleeves. I ended up winding off various lengths of my original skeins to get to later points in the color sequence, and it seems to have worked out okay. If you look closely at the shoulders on the front, there is a noticeable stripe, but I did that purposefully so both fronts would look like they matched. The sleeves don't quite match as well, but at least they share a lot of that green. 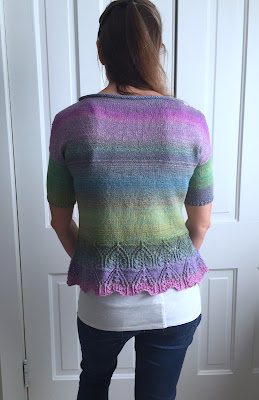 I'm delighted that this is done and I can now wear it (though where, I can't really say). My sweater mojo is still pretty high, and I dug out yarn to start another one soon.
I'm also still working on my Through the Loops Mystery Shawl, and I finished Clue 5 yesterday. Spoilers ahead! 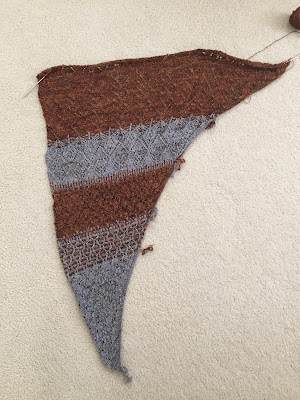 I know that's not the best photo, but it's getting large enough that it's difficult to get in the whole shawl and also show details (not to mention that the lace really won't be that apparent until it's blocked). Clue 5 used only Color B (the rust color, in my case) and was all lace. I was happy and surprised to see that when it was done, I had knit stems of flowers with curling leaves: 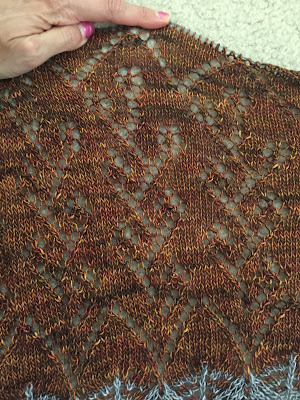 Can you see them? Again, apologies for the poor photo. This lovely shawl deserves a decent photo shoot, and it will definitely get one when it's finished and blocked. Next week's clue will be the final one, and I'm excited to see where this goes!
Now, as to reading, there is still quite a bit. On Friday night I finished reading the eighth book in the Inspector Gamache series, The Beautiful Mystery. This installment was a bit of a departure from the others, as it took place in a decidedly different setting: a remote cloistered monastery. It was a great read that kept me guessing, and the only reason I gave it 4 rather than 5 stars is that there is a turn at the end in the relationships of the main characters in the series that I did not like (though I suspect it's somewhat necessary to keep the recurring story lines interesting).
I'm now in the middle of three books (totally strange for me, but these are strange times). I have less than 100 pages left in How to Be an Antiracist, but it's a book I am purposefully taking my time with in order to fully digest what I'm reading. I'm also 40% or so into the current Read with Us selection, Wild Game. And I did finally borrow the audiobook of The Tenant of Wildfell Hall from the library. Though I'll continue to listen to it via Craftlit because I so value Heather's additional commentary, I wanted to finish it much faster. The version I'm listening to is narrated by Jenny Agutter and Alex Jennings, two people you'll likely be very familiar with if you also watch a lot of PBS period pieces, and it's delightful. I have quite a bit still left to listen to, but it's a treat to enjoy while I'm spinning.
That's all for me for today -- but I'll be back tomorrow with a new pattern!
Posted by Sarah at 10:08 AM