Hope everyone else had a productive knitting weekend like I did. I wound up not having to work for the first weekend in months (Saturday because they called me off, Sunday because I woke up sick). I thought that since I was on the couch anyway, I might as well put all this free time to good use.

Faced with a weekend of plenty of knitting time (but since I was at J's the whole weekend, I couldn't work on knitting for him, obviously), I decided to tackle this. I decided it was high time I attempted to knit a sweater, but still feeling somewhat apprehensive, I thought my best bet was starting with a baby sweater -- small enough to not waste too much yarn, but it would still give me the idea of how it felt to knit a garment that's not a hat or scarf (which has been most of my knitting to date). I also thought this would be a good stash-busting project, since I've got so much icky acrylic yarn left over from several crocheted afghan projects I did last year.

[And just as an aside here: I still don't think there's anything inherently wrong with acrylic yarn, especially if you're just messing around and experimenting. It's easy to deal with, machine washable, and keeps its shape and gauge. I like it for crocheting, especially big projects like afgans, where there is so much yarn used and the price starts to add up quickly. It makes a lot of sense if you're knitting something for babies or kids; I think it would be too much for me to think of a two-year-old spilling grape juice or something on a nice wool or cashmerino garment! Of course, when it comes to myself or certain other loved ones, I'm turning into a big of a yarn snob. ;-)]

So, as I said, I had a good knitting weekend. J and I were celebrating our one-year anniversary, and we actually had two other events to go to Saturday night before our celebratory dinner, but I had about six good hours of knitting time in before we had to get ready to go. Then, of course, as soon as we got home from dinner, J passed out on the couch, and as I was still wired, all I could do was knit for a couple more hours before bed. Sunday I was supposed to go to work, but woke up feeling not quite right (let's just say there were some female plumbing issues and leave it at that). And since I was spending the day on the couch anyway, what else to do but knit! So after three days of stitching with wild abandon, I give you this: 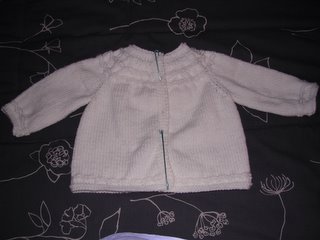 Pattern: Seamless Yoked Sweater by Carole Barenys (found on knitting.about.com)
Yarn: icky acrylic from stash
Needles: US 7's - 32 in. circular and dpns
Still needs to be blocked and buttons need to be sewn on, but I'm thrilled with the results. And many, many thanks to Jen, who put up with my webstalking and helped me decipher the pattern! Even though this was knit with "icky" acrylic, I think it might still make a nice gift for my cousin, who is expecting a baby in February. Hey, it's machine washable, so the kid can get whatever he/she wants on it and it won't be ruined.

Before I go, I'm just wondering if anyone else is reading this. I mean, part of the reason for having a blog is to use it like a diary; but if I wasn't interested in having anyone else read my thoughts, I have plenty of empty notebooks lying around. So, if you are reading this, do me a favor -- leave me a comment! It'd be nice to know that someone out there is looking at this besides me (and J, you don't count!)