After a long day at work yesterday, and then errands I had to run after work, I decided that what I really needed last night was some instant gratification knitting. So I sat down and started this (which I just finished a few minutes ago): 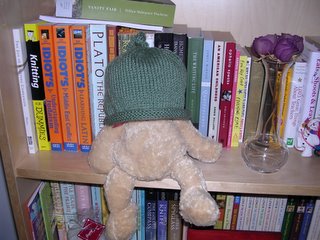 This is a modified version of the Umbilical Cord Hat from SnB (I made it bigger to fit a two-year-old). It's going to a little boy named Elijah, whose "stocking" I picked from my office gift drive for disadvantaged children at a local children's community center. I bought him some toys as well, but I always like to stick in something functional. The hat is here being modeled by Pomegranite Peach Teddy---he came with a shampoo/conditioner package in said fragrance---on one of my four bookshelves in my living room (have I mentioned that I like to read?) Not only was this a quick knitting fix, but it also used up some of my acrylic stash! This particular color was left over from an afghan I crocheted last year.

Tonight I'm going to try to do a mini sweater ornament to take to our family friends' house in Michigan for Christmas. I've made them an ornament (usually embroidered) every year we've gone there. Last year's ornament was a miniature stocking/sock. This is our last year going to their house (they're moving to the DC area soon), so I thought I'd go all out. Depending on how quickly that knits up, I may also cast on for a hat for my brother for one of his holiday gifts.

Thanks to Jen for the Blanche-Neige suggestions. I thought about e-mailing the designer to see if she could suggest an alternate yarn, but seeing as how her recommended yarn is her own -- well, somehow I'm guessing she wouldn't be so helpful. I'm still hoping that I can play with the gauge, especially since it's an open, cardigan-type garment that will be a little more forgiving if the gauge is slightly off. Or so I think. I'm probably going to put this project off for a bit, since I still have holiday gift knitting to do and I've been spending a lot of money lately. Then again, I'll have a lot of knitting time the last week of December when I'm off from work. Oh, the temptations!

Still seeking imput, if anyone has any!