Hail to the Victors

We are back from Ann Arbor and our visit with my brother. We had a great time, although it was not exactly a relaxing weekend. The highlight (other than seeing my baby brother, of course!) was an exciting Wolverines victory over Ball State. Here we are in the Big House, properly attired in our newly purchased U of M gear: 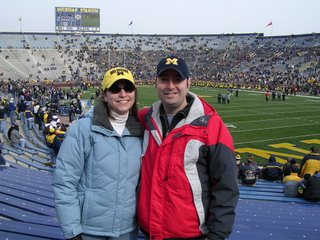 I may look like a blue marshmallow, but I'm warm!

At half time, after scarfing a hot dog and meeting up with brother, we made it back to our seats in time to watch the Michigan band perform a selection of favorite TV theme songs -- including the theme from Star Trek, which was led by a special guest conductor: 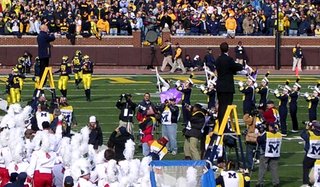 See the bald guy up on the ladder on the far left? It's a little hard to see since we were so far away (I enlarged the picture a bit), but that's no less than Patrick Stewart! Yes, Captain Jean Luc Picard himself (or Professor Xavier, if you prefer).

In addition to the game, we also had dinner two nights with brother and his two friends, who were also visiting for the weekend. Sure made the two of us feel old, hanging out with those young people (or perhaps young by proxy?). We also were able to meet my aunt and uncle for brunch yesterday before we headed home. I, for one, didn't sleep that much, but it was a fun weekend.

I did not get as much knitting done as I would have liked. Although I claimed I might have been able to finish the Clapotis for my mom on the trip, it was not to be. As of this morning, I was nearly done with eight of 13 straight rows repeats. It might have happened if I'd been monogamous to one project, but alas, the allure of the Pumpkin Pie Sock did me in; I couldn't resist its charm. You want to see what it looks like, don't you? Well here you go: 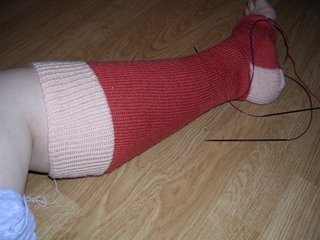 Yes, I know this isn't a great shot; my personal photographer left for Chicago for the week again today, so you're stuck with my trying to get a good angle of my own leg. As you can see, the first sock is almost done, and it fits perfectly. And before you start leaving me a comment telling me that my leg looks all lumpy -- those are the little yarn bobbins of the ends I have to weave in once the knitting is done. Which it should be shortly (roughly 1/2" more of the pumpkin and then the toe in cream).

Tonight I'm feeling generous, and Blogger is cooperating, so here's another shot so you can see the faux seam down the back of the leg: 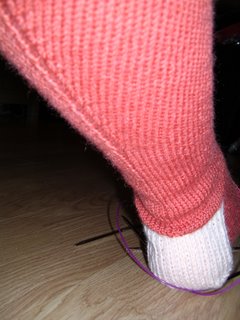 Calf muscle is not nearly as large
as it appears


I'm very pleased with how these are turning out, especially as all the math I did to create the pattern seems to be working out. I can't really give you the pattern, as it's made to fit my legs/feet, but if anyone is interested I'll be happy to write up the steps to create a custom-fit sock pattern. Just let me know by leaving me a comment (c'mon, you know you want to!).

Final thought for tonight: Unless you're living under a rock (or in another country), you should know what tomorrow is -- and I don't just mean the end of all those annoying campaign ads. Consider this a public service announcement and a friendly reminder to exercise your constitutional right to vote. I don't care who you vote for, just VOTE!
Posted by Sarah at 6:39 PM