Frogging in the Windy City

I am back from Chicago -- actually, I've been back for a full day. I was supposed to fly back this afternoon, but they were calling for a huge snowstorm in Chicago overnight Sunday into today and remember me? Ms. High Anxiety? Needless to say, I was freaking out. I was worried about getting stuck in Chicago and then getting home late and having to drive home from the airport in the dark and the rain, etc. etc. Plus I knew that I'd be such a nervous mess, I'd be really annoying to be around, and that wasn't how I wanted to spend my last day with J for the weekend. So we were able to switch my flight to Sunday afternoon, and today I spent the day going to the supermarket and then curled up with a good movie and my knitting. Ironically, the snowstorm never materialized, so I probably would have been fine, but just the same it was nice to have a relaxed day at home and get everything in order with plenty of time to spare before I have to go back to the grind tomorrow morning.

Aside from that minor blip, the weekend was a lot of fun. I survived my flight into Chi-town (my first solo flight since 2005, I think) and had some good knitting time at the airport while waiting for J to get in from Cleveland. We had a late dinner with my cousin and several of her friends, then promptly returned to J's apartment and passed out.

Saturday morning we fortified ourselves with a breakfast of egg white omelette and the best french toast in Chicago and headed out for a bit of sightseeing ... 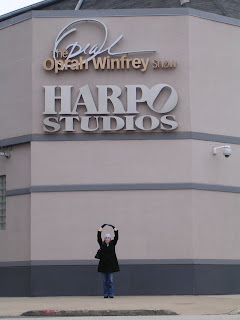 before a day of shopping (mostly of the window variety) on Michigan Avenue. After a late lunch, we returned to the apartment for some relaxation (me) and work (J) before we headed out for dinner with my aunt, uncle, and cousins. Now that it was daylight -- albeit quite cloudy -- I finally had the chance to fully appreciate the view from the apartment. Like, for instance, this: 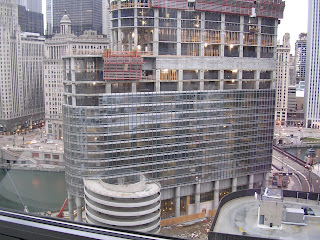 That's the new Trump building that's going up under the direction of Bill Rancic, the winner of the first season of The Apprentice. Saturday afternoon I watched them put up the TR in the TRUMP sign on the top with one of the two cranes on top of the building and then bring this down: 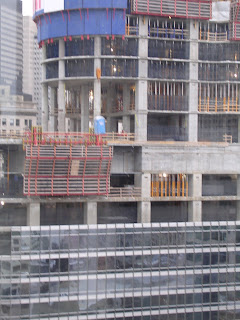 See that blue and white rectangle just above the red and silver section? Your eyes do not deceive you -- that is indeed a Port-o-John. I was watching closely to see if they dropped it by accident; you'll be happy to hear they did not, and the construction worker supervising from the ground remained, er, unsoiled.
I did a lot of knitting that afternoon and after dinner with the relatives. I was all the way through the gussets of my Jaywalker and tried it on -- uh oh. Way too big. I really should have tried it on sooner, because at that point there was nothing left to do but frog and start over from scratch. So that's what I did and knit throughout the entire flight home yesterday and most of today. It's a shame to think that by now I might've had a sock and a half, but I'd rather the socks actually fit. So now I have this: 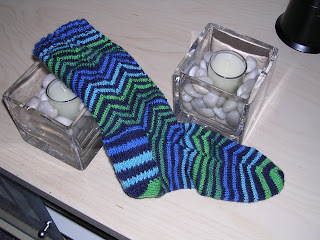 and the cuff of the mate. And you know what? This one fits perfectly, so it was all worth it. I'm loving the pattern again, especially how well it fits my foot (at least when I follow the right set of directions) and how nicely this self-striping yarn suits it.
Tomorrow it's back to work. I'm spending the night at my parents' (dad is away, mom and I will do some wedding stuff). My WEBS order with the yarn for J's sweater arrived today, so it looks like Wednesday night will be a winding party here chez Knit/Wit. I can't seem to put the Jaywalkers down, so expect a finished object report soon!
Posted by Sarah at 7:54 PM