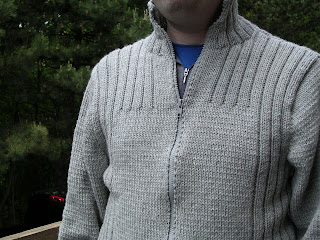 Pattern: Cambridge Jacket by Ann Budd (summer 2006 Interweave Knits)
Yarn: Cascade 220 (100% wool), color 8401, approximately 6.5 skeins
Needles: US 8 (5.0 mm) 32" Addi Turbo circs
Started/Completed: approximately January 20/March 18 (save sewing in of zipper, which was done last night)
Mods: only on the collar, which I fudged a bit to make the ribbing match up

This sweater was completed roughly two months ago, but I didn't get a chance to buy a zipper until last weekend, when I made the trip to Jo-Ann's to buy buttons for my Forecast. I bought two options -- one in white that was the full length of the sweater and one in light gray that was just a tad shorter. J selected the gray zipper, not only because it matched, but also because he did not want the neck to zip all the way up (he has sensitive skin and didn't want the wool rubbing against his skin right under his chin). This worked well with the front of the collar, which is angled just a bit at the top. Here you can see what it looks like zipped all the way up (and please excuse J's funny face): 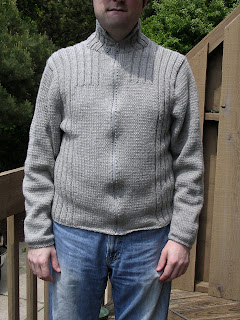 From this view you can see the one part of the sweater with which I'm not 100% pleased -- the sleeves. They're a little big for my taste, but J tells me he likes them, so I'm not about to rip and reknit. The zipper is also still a little wavy, but I have faith it'll smooth out just fine with a little wear.
Here's the back view: 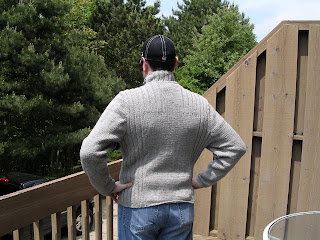 This still needs a good wet blocking to get all the stitches to relax and even out (I only did a spritz-and-pin blocking of the pieces prior to seaming), but then it will be going into storage with the rest of the sweaters until next fall.

The one element of this sweater of which I was unsure as I was knitting was the one edge stitch in garter stitch. It looked odd as it was knit, but look at how nice it looks next to the zipper: 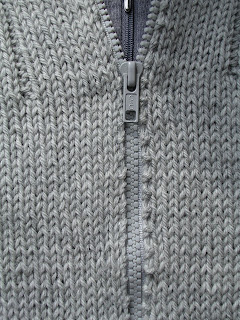 I'm so proud of myself for sewing in the zipper successfully -- my fear of messing the sweater up at this stage was probably the top reason why I put off zipper shopping for so long (and why I waited a whole week after buying the zipper before sewing it in). All in all, it wasn't that hard, just time consuming. I think I still prefer buttons, but at least now I won't immediately discount a pattern that involves a zipper.

Meanwhile, I'm already planning for J's next sweater, which will be an Elizabeth Zimmermann Seamless Hybrid (you can see a great example of one here). Would you believe I already have the yarn for it? We stopped at Knit One today because I had a gift card burning a hole in my pocket and J picked out a gorgeous charcoal shade of Cascade 220 -- still in keeping with his usual palette of shades of gray and black. I'll use the leftover yarn from the Cambridge Jacket to do the facings of the hems.

The socks in progress continue. I'm past the heel of my second Grasshopper sock, so I expect to have those finished in a day or two. I've been getting more and more unhappy with the socks I've been knitting for my future MIL as I've gone along, however, so I'm going to rip them and do some Embossed Leaves Socks (from Favorite Socks/Interweave Knits) instead. Jenn tells me they're a fast knit, and I've long been wanting to knit them. An added bonus is that I'll learn the pattern to be able to knit myself a pair -- perhaps with the Koigu I picked up today as well?