Tonight we're playing a game. It's called "Who Had the Most Productive Weekend?" Let's compare the stats.

The Mister? Well, he caught a squirrel. Two of them, actually. This is only the first one. 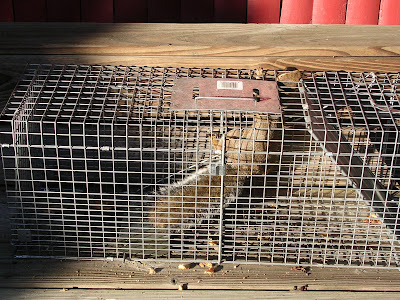 He also released both of them. I think he might have a future in pest control if he keeps this up.

Of course, what we did is nothing compared to Jen, who gave birth to twins Saturday morning! I think it would be really great if, once she's home and back online, she opened her e-mail to a bunch of congratulatory messages. So why not pop over to her blog and leave her a comment? I'm sure she'll appreciate it. Thanks!
Posted by Sarah at 7:41 PM

Email ThisBlogThis!Share to TwitterShare to FacebookShare to Pinterest
Labels: Life