We have the first finished project of the new year, finished on New Year's Day. I think the fact that it's an item for charity sets a good tone for the year ahead. 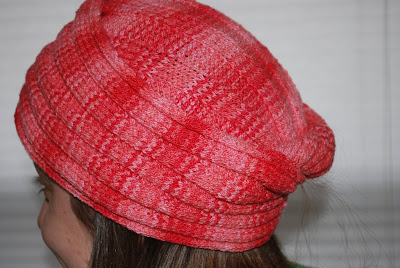 The construction of this hat is rather interesting. You start with a provisional cast on and knit until your strip of ribbing is 40 inches long (or, in my case 38"). Then you graft the two ends together, forming a long loop, and sew a seam 8" long along the side of one end. The turban is then worn by putting the sewn end on the head with the remaining loop to the back, twisting the loop, and then pulling the loop up to the front and around the head. (Obviously when used for its intended purpose, it wouldn't result in the funny tuft of hair you can see coming out of the back in the shot above). 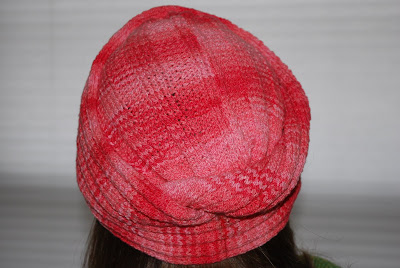 This was one of two hats I knit as part of a knitalong on Ravelry; the group is collecting chemo caps to be donated to the University of Chicago cancer center in honor of Madelyn Dunham, Barack Obama's grandmother. (The other hat was this furry thing resembling a Muppet pelt.) Both were sent off to the coordinator in Chicago this morning so that they'll get there in time to be donated to the cancer center on or around Inauguration Day.

Although this pattern makes for a really comfy hat, it was a bit of a pain to knit, in part because the grafting doesn't really work out -- because you're grafting knitting done in two opposite directions, the stitches are about half a stitch off when you're trying to line them up. Kitchenering didn't work, so I ended up knitting a row at each end with some contrasting yarn and then following the yarn to weave the two ends together. It wasn't so much difficult as it was fiddly and time consuming.

My main gripe, however, was the yarn. The fabric it produces is delightfully stretchy and really suited to this kind of project, but I found the quality seriously lacking. I came across two knots in the first skein and three in the second. For a skein of yarn that's only 100 yards long, that's just unacceptable in my book. I'm glad to have gotten it out of my stash and used it for a good cause. I don't think I'll be buying it again.

Tomorrow: New spinning and an update on my vest, with lots of progress!
Posted by Sarah at 2:58 PM