Finished, blocked, and modeled -- unfortunately not in natural light. 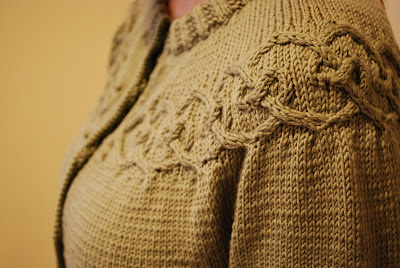 The color in these shots is much more accurate: 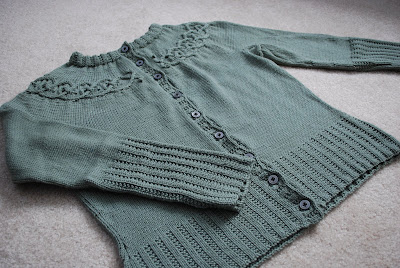 I first swatched for this sweater sometime last year -- so long ago that I don't even remember when. Luckily I had the foresight to note my gauge with my chosen needles on a Post-It in my copy of the magazine, so when I was ready to cast on, I didn't have to start from scratch.

My gauge was a little off, so I decided to knit a size larger than normal in order to ensure a little bit of positive ease (I usually wear sweaters with one or more layers underneath, so I didn't want this to be tight). I gained some additional ease in blocking, as the yarn stretched ever so slightly, resulting in a very comfortable sweater that will be cozy and soft to throw over my shoulders come fall. 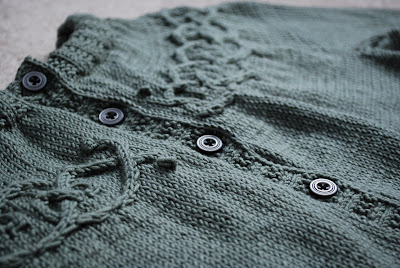 I think the cables pop nicely in this cabled yarn, and thankfully the puckering I saw when the sweater was fresh off the needles smoothed out a lot in blocking.

As to the buttons, they're a dark gray that came from the grab bags I bought at a big-box store months ago, and as luck would have it, I had exactly the number I needed. I think they're a perfect fit. 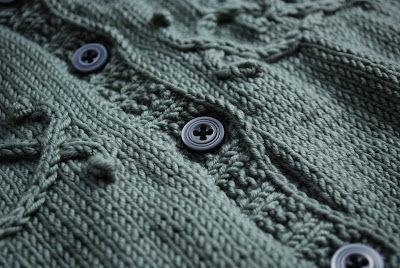 Overall, I'd say this sweater was a success. Perhaps I didn't do the best job of substituting yarns, but I'm happy with the result and I know this sweater will be worn many times during the colder months of the year.

And, as predicted, as soon as the last stitch was cast off and all the ends were woven in, we began experiencing temperatures in the 80s.