Ribbed, for Our Pleasure

It took three days to dry after it was blocked, but it was worth it! 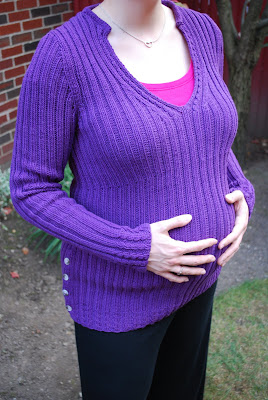 I thought that I might go crazy from knitting nothing but 2x2 rib, but as you can tell from the span of time it took me to complete the sweater, it wasn't nearly as bad as I thought. Yes, there were days when I had to stop and rest when my hands got tired of knitting rib with a mostly cotton yarn, but the knitting went surprisingly quickly.

I really can't say enough about this pattern; it's so, so clever. The ribbing makes the garment extremely stretchy as it is, but there are little touches that make the sweater so flattering on an expanding belly.

For starters, there's a series of short rows worked just below the bustline to shape the front piece to fit the top of the belly and prevent it from riding up (because while some people think it's fashionable to show off a bare pregnant stomach, I am not one of them). 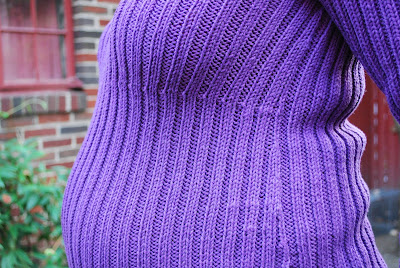 Then, for the later months and weeks of pregnancy, there is a button placket along each side of the sweater, allowing you to open it up for even more room. 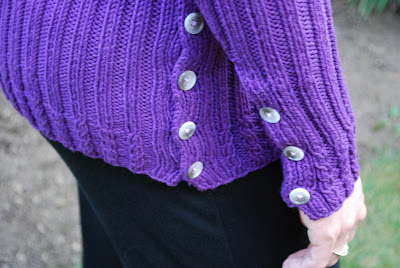 In addition to these very functional features, there are some really nice touches that add a bit of dressiness -- like the button plackets on the cuffs of the sleeves that are more decorative than functional and the columns of twisted stitches/faux cables at the bottoms of the ribs. 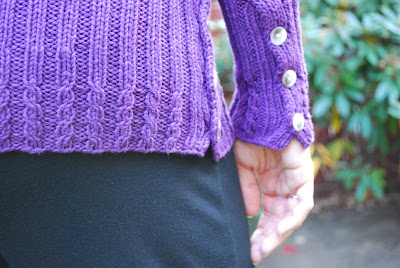 The ribs on either side of the neckline are twisted as well, and the collar is finished off with six rows of stockinette and live stitches that are grafted to the base of where they were picked up. 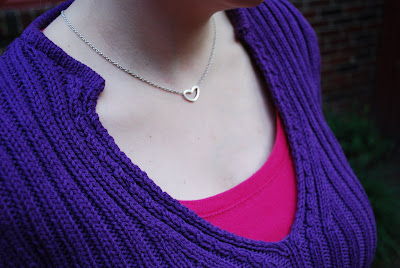 I wouldn't say that I'm in a hurry to knit a lot of 2x2 ribbing in the near future, but I can say that I absolutely loved knitting this sweater. The yarn wasn't the easiest on my hands at times, but I enjoyed working with it and like the finished fabric. The pattern is very well written and results in an extremely wearable garment. I know I'm going to get a lot of use out of this sweater this fall and likely for a little while after Rainbow is born.

Best of all? I still have two and a half skeins of the yarn to make something for Rainbow! Think I should do a ribbed sweater so we can match?
Posted by Sarah at 7:21 PM