What do you do when you're itching to start a new project (but can't start something really big) and it's suddenly freezing outside? Knit a pair of mittens! 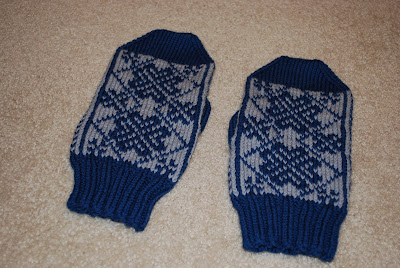 As colorwork patterns go, these were pretty easy. The tops of the mittens contain the pattern that requires paying attention to the chart, while the pattern on the palm side is just a simple alternating of the two colors. I really did knit the first mitten in a day (though understand that it was over the course of most of the day, meaning more than five hours of knitting time total). The second one took just a few evenings of casual stitching. 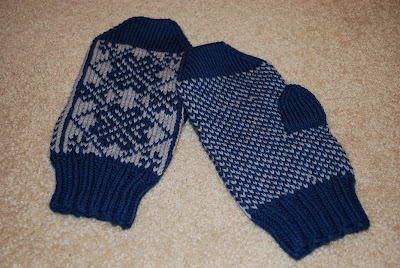 This pattern had been in my Ravelry queue for quite a while, and I'd even swatched for them a long time ago, back before we moved into our house. Somehow, even without writing anything down, I'd remembered that I'd need to go down a needle size than what was specified in the pattern, so when I finally pulled out the pattern and my yarn, I just cast on.

Though these were a fast knit, I can't say I'm completely thrilled with the outcome. They came out a little on the squat side, though they do fit fine, and I had some issues picking up the stitches above the thumb hole -- though that's really more to do with the fact that I was trying to pick up stitches knit with two colors. The yarn is also a little on the rough side, but it's designed for colorwork in outerwear garments, which means these mittens should wear well. I'll have plenty of opportunity to try them out right away, too, because it's been snowing all day here and is supposed to go down into the teens tonight! Brrr!
Posted by Sarah at 7:18 PM