So here we are on the last day of 2010. It's been a big year for many reasons, but it's been a really productive year in terms of my spinning. I've learned a lot and definitely reached outside my comfort zone, in large part due to my membership in the Crown Mountain Farms fiber club. I've signed up again for next year (and already received my first shipment!), but I have two spins from 2010's shipments to show you (and one more to come, but it's in its bath right now).

First is November's shipment, which was Norwegian top dyed in gorgeous jewel tones in a colorway called Mandala. I knew that I wanted to maintain the colors and have a fairly fast spin, so I spun a relatively thick single and chain plied it. 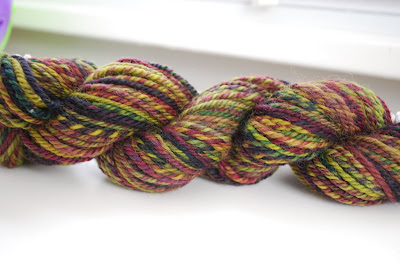 The resulting yarn is a heavy worsted to bulky and a whopping 95 yards. This is most definitely the thickest yarn I've ever spun, which is actually an accomplishment if you know what I normally spin.

Next is the final shipment for 2010, a soft and lovely BFL in a lovely colorway called Karmapa. I opted for a two ply on this one. 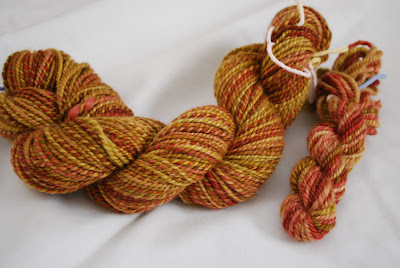 The big skein is DK weight and approximately 145 yards. I chain plied the singles leftover on one bobbin and got an additional 13 yards (which Rainbow has enjoyed squishing).

I'm excited to see what the 2011 club has to offer; if the first shipment is any indication, it's going to be fantastic.

As this year draws to a close, I'd like to thank all of you who have stuck with me on the blog, even though I haven't been able to post as often as I'd like. I really appreciate your comments and the fact that you're still reading. I wish you all a happy, healthy, and fibery 2011!
Posted by Sarah at 3:54 PM