Finally, a chance to show an unblogged project! 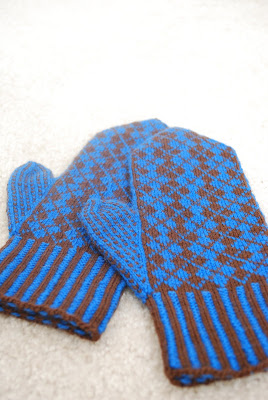 These took me a little while because these were my designated lunch break knitting, which meant they only saw about 30-40 minues of knitting a day during the week. Add to that the fact that I'm a little slower when knitting colorwork and you can understand why they took a month and a half to finish.

The last time I knit these mittens, I used a circular and magic looped. This time around, I decided to try dpns to see how I liked them for colorwork. The answer? Not so much. I found them to be more difficult to hold, probably because I do stranded colorwork with one color in each hand, which means less fingers to hold the needles. There's also a slightly noticeable line down the middle of the mitten where the split for the needles was, but I think it'll even out with wear. 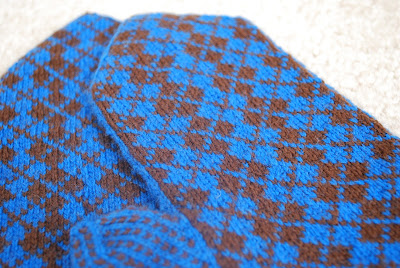 The only real glitch with these mittens is that I somehow mismeasured when I was knitting the thumbs and ended them a little soon -- so these will go into the long-term planning box for someone with stubby thumbs!
Posted by Sarah at 8:00 PM