After a month and a half of spinning nothing but the brown yarn for my sweater, I was thrilled to be able to get to something with color in it. It was also nice to spin my default thin singles again! 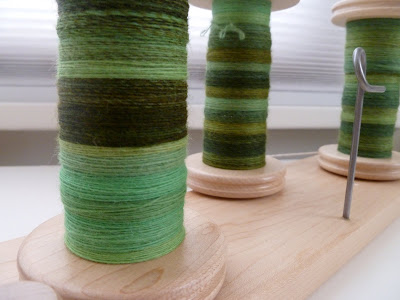 Once I started on this, it seemed to spin itself up in a very short period of time. This is South African from Crown Mountain Farms, the January shipment from this year's fiber club. The colorway is called Celtic Glow, and it's very well named, in my opinion. This photograph doesn't do it justice -- some of these green shades do indeed seem to be glowing! I started plying today after finishing the last bobbin of singles last night, and it's turning out to be a light fingering weight. This is my first time spinning this wool breed, and I'm thoroughly enjoying it. It doesn't hurt that it's not brown and doesn't shed all over me while I spin!
Posted by Sarah at 7:52 PM