For most projects I knit, I usually have a moment when I'm worried I'm going to run short on yarn. Rarely have I had a project that didn't seem to want to use up the yarn. That's certainly the case with my Hitofude, which is still in progress. I'm now on my second extra lace repeat, and I still haven't made it to the last color in the gradient. I'm hopeful that will happen soon, because I am ready to be done with this project -- and frankly I'm getting worried that it'll be enormous once I block it (though it looks to be a reasonable length at the moment). 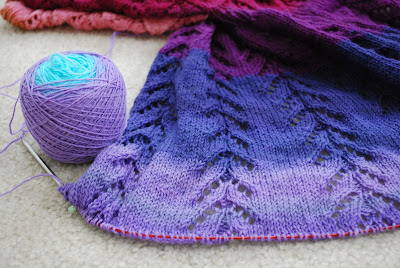 I knew when I started this project that I had nearly 200 yards more yarn than called for in the pattern for my size, but I figured I would add a bit of extra length. I suppose that in my concern that I would have enough yardage when I was spinning the yarn, I may have overdone it, as I now seem to have the magic ball of yarn that refuses to run out!

In any case, I'm hoping to be done by this weekend. I should be able to get through six or eight more rows tonight, so there will just be a handful of rows left in the lace and then the ribbing at the bottom to finish up. I am taking the day off tomorrow (it's Rainbow's last day of kindergarten, and they're done at 10:30), and I imagine at least part of the day will be spent stretched out and relaxing -- which means some bonus knitting time for me!

I am holding off on casting on my Waiting for Rain for my LYS's knitalong until after the sweater is off the needles, and frankly it's a good thing because I still can't decide which color I want to be the main color and which I want to use for the lace and the stripes.

For my lunchtime knitting, I did cast on something new, and I'm rather excited about it. I don't think I've mentioned it here on the blog, but I'm working on a themed collection of patterns that I'm hoping to release later this year. I spent the earlier part of the year sketching and planning and arranging yarn support, and now I've cast on for the first sample. 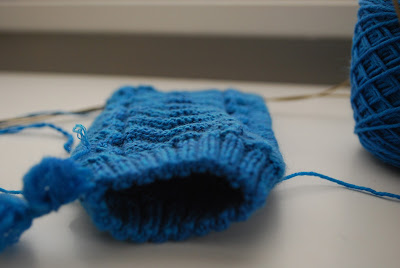 This is the start of a pair of socks with some cables and texture, and I'm knitting them out of SpaceCadet Oriana 8-ply, which is a really interesting yarn. It actually has eight plies, so I have to be careful that I don't split the strand with my needles as I knit. The knit fabric has an almost cottony feel but with the elasticity of wool. The color varies ever so subtly, too, so it's working very well with the texture of the pattern. I know I'm kind of teasing you with this little glimpse, but you'll be seeing a lot of projects for this collection over the coming months.
Posted by Sarah at 5:28 PM