For a while there I felt like I was in a bit of a rut with my projects, but now the stars are all starting to align and things are starting to come off my needles! For starters, I finished my handspun socks: 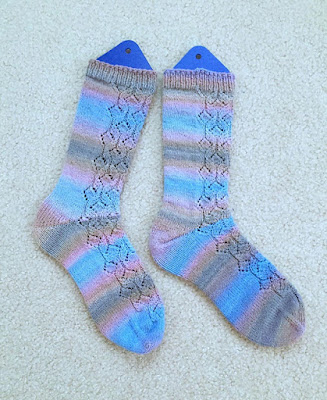 These were a fun knit and, once I had the pattern memorized, a fast project as well. I definitely picked up speed on the second sock once I knew what I was doing. I can still see the mistake in the first sock (it's the one on the left in the photo, and the mistake is right at the bend of the ankle), but I don't think it's very obvious to anyone else, so it's staying in. I'm very pleased with how the yarn striped, and I'm looking forward to seeing how the Cheviot holds up in socks.

This is the first thing I'd knit with these needles, and while they weren't too bad to use, I'm not terribly impressed with them. The cable was rather a bother at times, as it would curl up on me and get in the way, and the inch markings along the cable itself were rubbing off as I worked. The markings on the needle tips, though, were definitely helpful to have (and I actually remembered to use them by the time I got to the second sock!), and the tips are good and pointy. I don't think they'll replace my favorite Addi Sock Rockets for socks, but they are a much more reasonably priced alternative.

If everything goes according to plan this evening, by the time I go to bed, I'll have another project off the needles, and it's a big one -- my Darkwater. 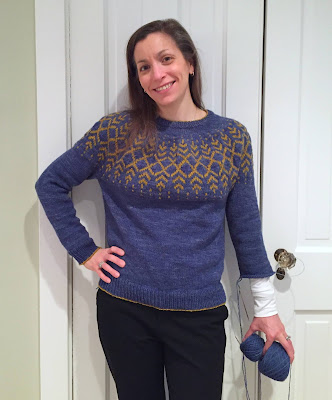 All that's left is that little bit of sleeve, maybe 4 inches or so. I've already put Rainbow on notice that we're having a girls' evening (the Mister has a work dinner), so that means a quick dinner so that I can get to knitting and she can get to reading a library book. If I can get in a solid two hours of knitting, I should be golden.

I'm also making noticeable progress on my Brackthaw mittens, which are now my main focus during my lunch breaks. Yesterday I finished up the thumb gusset of the first mitten, and now I'm flying up the rest of the hand.

I had neglected to put my tapestry needles back into my project bag, so I made do with what I had on hand to put the thumb stitches on hold: I used the string from the tag from the Quince & Co. Finch I'm using as my waste yarn and got the stitches onto it by using it as my working yarn and pulling through each stitch I used. Was it the most efficient way to get the job done? Probably not, but it worked just fine -- and I felt rather smart as an added bonus, which is always a good thing.
Posted by Sarah at 9:38 AM