I Wish You Could Squish This

The stars finally aligned for me this past weekend. I was "working" from home Friday afternoon so I could be there as we got our new ovens installed (the Mister was as well but was on calls up in his office pretty much the whole time). When I say working, I mean that I was sitting next to my computer with my email open in case something came in requiring my attention -- and nothing did -- but in the meantime I was able to catch up on some video podcasts and finish spinning my second bobbin of Pretty (the colorway) singles. Yesterday, after a rather harrowing trip to Costco, which I would not have done had we not been running low on our preferred coffee, I decided I would reward myself with plying time. I was able to finish up the skein in one go and then skeined and washed right away so it would be dry this morning. And oh my goodness, I am absolutely in love! 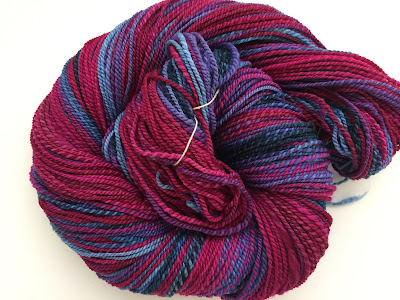 I had split my original fiber in half down the middle vertically, spun each half in the same direction, and then plied the halves together. The idea was that there would be lots of places where the colors of the plies were the same but also some places (because I am human and therefore inconsistent) where the colors would not match and I'd get some lovely barberpoling. 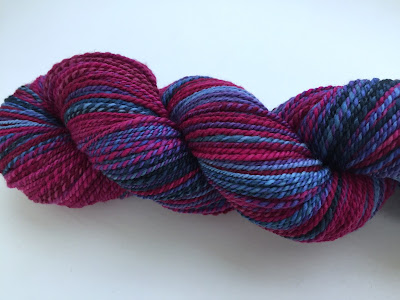 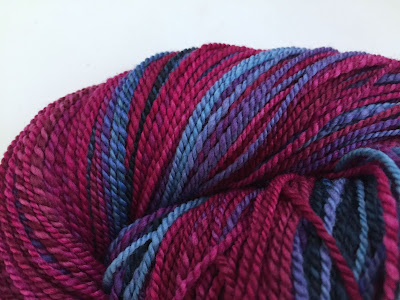 This fiber is uber soft, so naturally I want to put it up against my neck. In fact, while I was plying, I had an interesting idea for a new design that I might use it for, which means this skein isn't likely to get buried in my stash anytime soon. At the moment, though, I'm just planning to keep squishing it, and I wish you could squish it through the screen!
Posted by Sarah at 3:22 PM