At long last, my Tour de Fleece sweater spin is complete! (And yes, I'm aware that TdF ended months ago!) 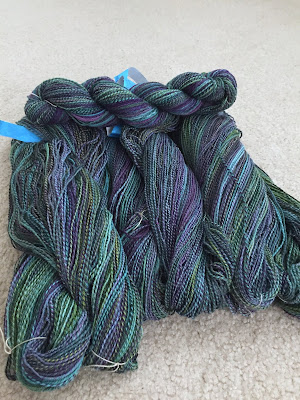 All the yarn is plied and washed, but most of it is still damp, so I don't yet have the final yardage, nor can I tell what the final thickness of the yarn is. The only skein that dried in time for this photo is the little one on top that's twisted into a proper skein. That one is made of the last of the plying, and it's roughly half traditional three ply, half chain ply. When the first bobbin of singles ran out, I wound off what was left on one of the others and used both ends of it to ply with the remaining bobbin. But when I ran out again and had only one bobbin left with singles (and a significant amount), I figured I might as well chain ply them to use up as much as possible. I think the fact that the three main skeins are still damp speaks to just how big they are; they were washed last night, and I squeezed them out by hand in addition to rolling them in a towel and stomping on them so it's not like they were dripping wet to begin with. I'm hopefully that I'll have somewhere in the neighborhood of 1,200 yards.

I'd hoped to start a new spinning project today, but it's been a busy one! We started it out with this: 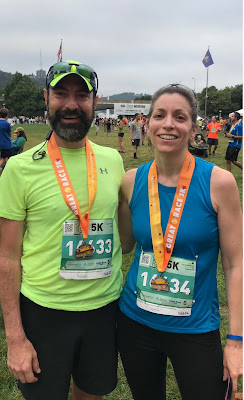 The Mister and I both ran and finished the City of Pittsburgh Great Race 5K! It's not such a big deal for the Mister; he runs that much just about every day and has been doing the race for about 10 years. For me, though, it's an accomplishment. I think this was the fourth year I've run it and for sure only the second time I managed to run the entire thing without having to walk a bit to catch my breath. I'm fairly certain I also set a new personal best time this year. According to the official results, I finished it in a time of 28:33, though my running app said 27:55. Either way, it's still more than a minute faster that my previous best time in this race. [Edit: Apparently I misunderstood! 28:33 was the time on the clock, but because I didn't cross the start line right away, my time was actually 27:54!]

This afternoon Rainbow and I were busy baking banana bread and making homemade apple sauce using some of the apples we picked yesterday on a trip to a local apple orchard with some friends. And tonight we're headed to dinner at my parents' to start our celebration of Rosh Hashanah, the Jewish new year. If you're also marking the holiday, I wish you and your loved ones a very happy, healthy, and sweet 5780!
Posted by SJ at 4:32 PM