Shocked? So am I. But anyway... As I alluded to in my earlier post, I did some ripping 'o the lace late last week. I'd learned the hard way that gossiping and lace knitting do not match. After my meet-up knitting session, I had quite a few mistakes, and rather than trying to cover them up (which I was finding myself having to do quite often) I decided to just start from scratch and this time really pay attention to what I was doing. I'm now through two repeats (of 14) of the body chart and it looks much better, although there still some weirdness going on that I just can't explain. No pictures yet, but I'll post some when I've made some more progress.

I had a mini shopping spree over the weekend. Sadly, my local JoAnn's is going out of business, so they are selling everything at a very nice discount. Take a look at what I snagged in a mere 20 minutes of browsing. 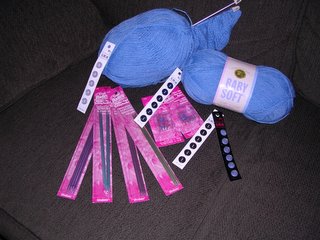 Here you see some baby yarn (with the beginnings of Trellis on some US 6s), two packages of the stitch markers I favor for lace knitting, four strips of buttons (in pearlescent white, dark gray, and blue), and dpn's in US 1, 2, 3, and 6. All of this for about 30 bucks! I was tempted to buy some Patton's wool yarn (I forget which type), but I didn't have a project in mind at the time and decided that I had enough in my basket for one day.

Here's a closeup of one repeat of the chart for Trellis: 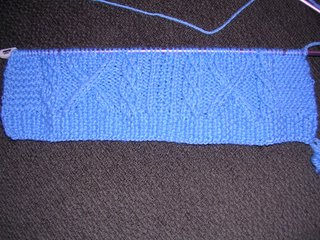 This is nowhere near gauge for this pattern, but frankly I just wanted to get to know the pattern and the stitches, and the yarn was cheap, so I'm not terribly concerned. I'm doing the largest size, so if it actually comes out nicely, it might do to fit an infant.

Still awaiting my shipment from Knit Picks, which I really thought would come today. I'm hoping for tomorrow. Still also contemplating entering the Knitting Olympics with Blanche-Neige, since I know I'll be parked in front of the TV just about every night (especially when there's skating on). I'm cutting out the fancy parts of the pattern, like the beading, so it's really not too complicated a pattern, and two weeks might be enough time if I only focus on the one project. What do all of you webstalkers, er, I mean, blog readers think? Should I go for the gold? (And has anyone tried this pattern and know if it's doable in a fortnight?)