After finishing up the French Market Bag and my Jaywalker swatch last night, I decided that my next move should be tackling one of the UFOs taking up space (and looking messy!) atop my newly organized stash -- in other words, the long-neglected baby cashmerino tube scarf. I took my inspiration from Jen, a fellow long-scarf-lover, who decided to bind off her mother's scarf much sooner than she would have if it were for her; I decided that I'd just had enough with this scarf and bound off this morning. I'd been working on it since last March, having started it when I was stuck in my best friend's apartment in Philadelphia with the flu (so much for my vacation!), with yarn and needles purchased at my former LYS. Before blocking it was five feet long, plus some inches (I didn't measure very carefully). Here you can see it finishing up its blocking: 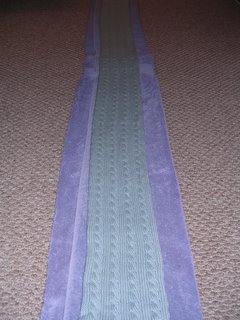 (I apologize for the crappiness [sorry, J!] of this picture. The towel on which the scarf is resting is rather close to the color of the yarn. I promise to take another picture of it, with the chocolate brown suede coat it's meant to go with, once it's dry.)

Pattern: My own (and definitely not one of my best, but at least it was simple)
Needles: US 5 bamboo 16" circulars
Yard: Debbie Bliss Baby Cashmerino in a light blue shade (lost the color number), 5+ balls
Notes: After blocking, the scarf measures about 66 inches long. I used 5 full balls of the yarn, plus a little bit of the last one I had (I'm planning on using the extra yarn to make this cutie, or maybe two.) Since the scarf was knit in the round, it's a long tube, but I've blocked it to lie flat so that it'll be like a double thickness scarf. I love love LOVE this yarn, so I really don't care about the mistakes I made because I wasn't paying attention to my cabling; I can't wait to feel the softness against my neck.

Next up: finishing Clappy, my Clapotis (currently half done) and casting on for Jaywalker #1, which will be my travel/work project. (And a note on the Jaywalker: this is the first time I've seriously swatched for a project, and it's a success! I used US 2 -- but I think they're more like 1.5 -- needles and got 32 stitches over four inches; the pattern calls for 31 over four inches. If you ask me, that's pretty darn close. I don't think an extra quarter of a stitch each inch is worth playing around with needles.)