Look-y here at what I finished whipping up last night for a new baby in the extended "family": 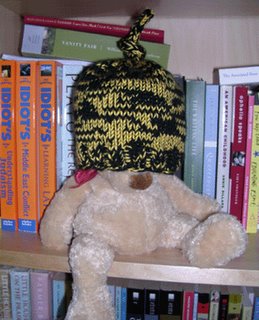 Pattern: Umbilical Cord Hat from SnB
Needles: US 8 (ribbing) and 7 (stockinette) 16" circs and US 7 dpns
Yarn: Some anonymous black acrylic (probably Red Heart) and Lion Brand Micro Spun in a gold shade (left over from this project - the lower one)
Mods: I did five rows of K2P2 ribbing for the brim rather than the stockinette roll brim the pattern calls for; this hat is for Steelers games, and I wanted it to stay down to cover the little 'un's ears from the cold Pittsburgh winter weather. This hat is also a lot stiffer due to the doubled yarn. I only have to assume that will make it warmer.

The recipient of this hat will presumable fill it better than the model. I just want to wash it (since who knows where that black yarn has been or how long it's been sitting in my stash!) before I gift it. A satisfying, quick knit, but it was hard on my hands. I don't recommend doubling the yarn for a project that doesn't call for it.

I also finished knitting up this last night: 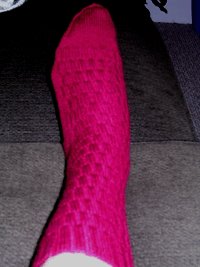 Notice it fits my foot. Although I don't have photographic proof, take my word that it will not fit J's foot. This is a problem, since these socks were intended for him. I followed the pattern faithfully (it's Gentleman's Fancy Sock from Nancy Bush's Knitting Vintage Socks), but it was on size 0 needles, and I think I've determined that I knit too tightly to get it to be the size intended. Frustrating, but not a complete disaster. I'd ordered three skeins of this color to begin with, and the one sock used less than a full skein, so there should be enough (I hope) to complete two more socks for a full pair for J -- this time on size 1 needles! I doubled the cast on yarn for a stretchier cuff, and am now knitting away on two circs, which are oh so much faster (and easier on my hands) than the metal US 0 dpns I used for the first one.

Finally did you see who left me a comment on my last post?! Omg, I am still in shock. :-) So, Laurie, in case you happen to stop by here again, I'll spill the secret to socks with matching stripes: use self-striping yarn, and start both socks at the same point in the striping pattern (I started in the middle of the white stripe, at the faux fair isle part). This is a whole lot easier if the striping pattern is fairly simple, and the pattern has to be regular and repeating. Non-knitters are really impressed by stripes, especially if they match, and the self-striping yarns make it so easy to impress!