It's been quite a knitting week -- two knitting nights in a row! Thrilling, but also tough on the hands (I've had some hand cramping, and that never happens, so I must be knitting a lot).

Most of the knitting this week has been on Seraphim, and I've even joined the Seraphim KAL. At the moment I have two more rows to knit and then I get to start the lace charts, which I'm anxious to do (my eyes, however, aren't very happy about my progress). Here's the obligatory progress shot, although there's not much to see other than some YOs amidst two spans of stockinette: 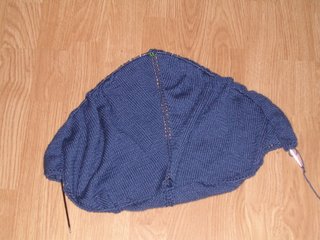 Seraphim's first public outing was to knit night at my new LYS, Yarns By Design in Oakmont. It took me quite a while to find the shop, as it's rather out of the way (for anyone planning on making a visit, it's in a small business park off an alley behind Hoffstot's restaurant). It's an adorable little shop with a good start on its yarn selection (lots of Cascade and Debbie Bliss, a decent baby yarn section). There ended up being a pretty big crowd of lovely ladies there to knit. Jen made me wear my Adamas shawl the whole time I was there, and I got quite a few compliments. Of course, I could not leave the store empty handed, especially as the prices were so reasonable. Here's a shot of the haul: 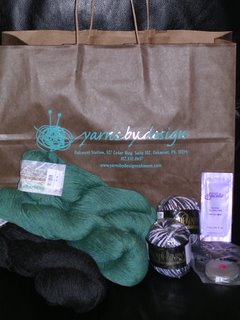 Here are three skeins of Cascade 220, two in a heathered emerald shade and one in a deep charcoal gray. These are destined to be another French Market Bag, which I will probably start next week to take on our road trip to Ann Arbor next weeks. I also decided to try some Cascade Fixation; although I haven't picked out a pattern for this yarn yet, I'm already calling them my Jailbird socks (look at the colorway and you'll see why -- I have a feeling they'll wind up being black and white stripes). I was also gifted with a sample of Eucalan and a fun measuring tape, the type that zaps back into the case when you press the button in the center.

Last night was the regular third-Wednesday-of-the-month knit night at the Waterworks Barnes & Noble. The usual suspects were there (myself included), but we were also joined by Marsha, a prolific lace shawl knitter who we hope will bring some show-and-tell next month! Our record of spotting, well, characters, let's say, at this meeting spot stands for another month. We not only saw our favorite 40-toting superhero fan, who arrived right on schedule, we actually spotted a man walking a pig. Yes, you read that correctly, A MAN WALKING A PIG. Don't believe me? See the pictures. I kid you not. All the more reason to come out and join us next month!
Posted by Sarah at 6:32 PM