For most of the weekend, I knit diligently on the growing French Market Bag. It's now close to being finished, with two of the four handle sections left to be knit and ends to be woven in. I don't think I realized just how large it was until I laid it out on the couch to take this picture: 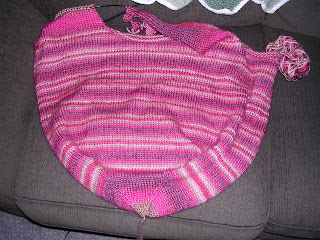 Yup, it covers pretty much all of one of the couch cushions. I wanted this bag to be bigger than the first one I knit, but I think I may have gotten a little carried away. Tonight I will be finishing it, and depending on how long that takes me I may throw it in the wash as well to begin the felting fun. Look for a finished bag in the next couple of days.

My other knitting is a little boring at the moment. I've got a few cable crosses done on the back of my Central Park Hoodie and about three inches done on the second red garter rib sock. I'm in a bit of a funk, as I just can't get too excited about any particular project. Since lack of knitting progress makes for boring blog posts, I'll do my best to get into one project or another -- perhaps the Seamless Hybrid I'll finally allow myself to cast on for once the bag is off the needles? We shall see ...

In the meantime, I must admit that I've been seriously remiss in noting that Jess, Octopus Knits, and Yvonne have all nominated me a

Thanks, gals! Since I've taken so long to publicly acknowledge this honor, just about every other female blogger in the universe has already been nominated, so might I suggest you check out my blogroll? There are plenty of Rockin' Girl Bloggers there -- not to mention a few rockin' guy bloggers as well!