I tried to come up with a clever title for this post ...

but I couldn't. Will you settle for some knitting content instead?

Last night I decided on my Central Park Hoodie for my Hurricane Knitters knit night project. I felt like I'd been neglecting it; I hadn't touched it in a week, not since I cast on for the Seamless Hybrid. After knitting Cascade 220 on US 5s, I realized how much faster the knitting grows when you knit Cascade 220 on US 8s. Here's the back, approximately 3/4 complete: 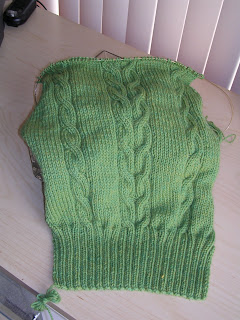 I just love this yarn. It's a heathered shade, so there are subtle color changes that in no way approach pooling: Knit night was a blast. I think Roaming Tigger (or, as we're now calling him, Taliban Tigger) had the best time. We had a big crowd -- so big that we added a table not once but twice to our original grouping. So big that those of us at one end didn't really get to talk to the people at the other end because they were too far away. We're all hoping the newcomers join us again.

I am anxious to finish the back to the CPH, but first Kenny tagged me for a meme. It's the Eight Random Things About Me meme (stop me if you've heard this one):

Technically I'm supposed to tag eight people for this meme, but I'm going to buck the trend. Instead, why not leave me a comment with a random fact about you?