Thanks for all your compliments on the Canada socks. I'm quite pleased with my first "real" stranded colorwork, and I've certainly been bitten by that bug. I'm not sure the Soft Sea Wool was the best yarn to use; it has a rather bumpy texture, and I think because of that the colorwork portions aren't as smooth or distinct as they could be. But the socks are incredibly squishy and comfortable, and I know come winter I'll be glad to have them.

Knitting continues apace on the two sweaters. The Seamless Hybrid isn't moving very quickly; to be honest, I haven't given it much attention the past few days. The CPH is coming along faster (as you would expect for something at a larger gauge). The back was complete last Thursday night, and now I'm about halfway through the left front. Seeing as we're still experiencing highs in the 80s, I'm in no hurry to finish a hoodie at the moment.

While I'm far from completing either of the two sweaters on the needles, I'm already thinking of what's next -- the Tangled Yoke Cardigan. I bought the yarn for it back in July, and last night I swatched on US 5 needles. I bought the yarn primarily because it was so incredibly soft (although it's being on sale didn't hurt!) and I suspected it would work well with the cables. I was very pleased at the remarkable stitch definition that resulted, even after blocking: 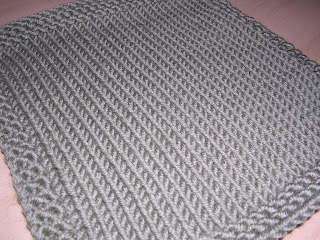 Unfortunately, my gauge is way off. I'm getting about five stitches to the inch, and I need to be getting six. So tonight I'm knitting another swatch (going down a size) and hoping for the best. I'll be okay if I'm off by a stitch or two, as I'm between the sizes given in the pattern and can use it to my advantage, but being this far off makes my head hurt to even begin to think of the math involved!
Posted by Sarah at 8:12 PM