(Sorry if I've just gotten Carly Simon stuck in your head with that title!)

So, it's official: I've ordered my wheel. My credit card has been charged, so I assume it is on its way to me. Now it's just a matter of waiting, which I'm not very good at.

In the meantime, I've been knitting a lot. I finished a pair of socks this past week: 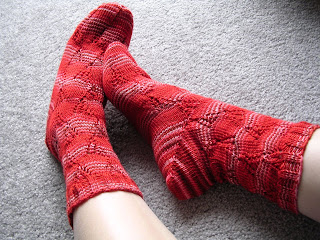 Although I'm not usually a fan of short-row heels (they just don't fit as well as a heel-flap-and-gusset heel), I decided to go with the pattern for this particular sock, as substituting a heel flap would have been tricky to get to work with the stitch pattern. The first sock gave me trouble; if you look at the left sock in the photo below, you'll notice that it's a bit lumpy along the diagonal created by the short rows. This is because when I wrapped the stitches as instructed in the pattern, I wound up with some pretty sizeable holes on one side of the heel. Rather than ripping the heel out and doing it again (which might have been the better solution, in retrospect), I stitched the holes up from the inside when the sock was done, hence the bumpiness. For the second sock (on the right), I changed the way I wrapped the stitches on the right side, and this seemed to make all the difference. 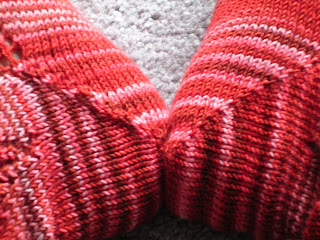 These still need a good blocking (as I'm sure you can tell from the pointiness of my heels), but I think they will be worked into my wardrobe pretty soon. I'm still not a fan of the short-row heel, but in this case it did work to keep the colorway from pooling horribly.

Yesterday was my "spring break" from work and, after running my errands in the morning, I spent most of the day watching girly movies and knitting. I finished what I hope will be the final baby sweater, but it's still a bit damp from blocking so you'll have to wait to see it. Now, I find myself with only one active WIP (Ravelry link) -- such an odd situation to be in! It's probably a good situation if the wheel is on the way, I guess!
Posted by Sarah at 5:00 PM