Remember that test knit? The other night, I was a mere three or four rows away from finishing the yoke (which is all I've got to knit for the magazine). Then, I made the mistake of checking my e-mail yesterday. Turns out there was a small mistake in the pattern -- but not small enough that I could avoid frogging and starting again. So, now here's where I am: 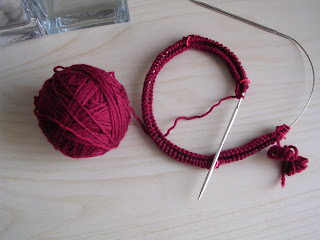 Looks like it'll be a while before this is done and I can get back to Seamless Hybrid #2. Not that it really matters; it'll be quite a while before The Mister would want to wear a wool sweater.

I haven't done any more spinning since Sunday (I've been out the past two evenings and still have to prep the rest of the fiber), but my niddy noddy finally came yesterday, along with some pretty new fiber (padding for the box, you know), so I was able to skein up and wash my first handspun on my own wheel. It's still a tad bit damp on one end and still smells rather sheepy, but isn't it pretty? 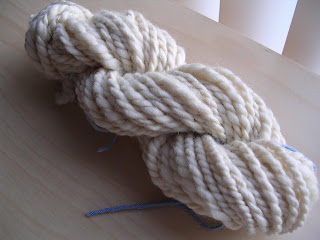 It's definitely a bulkier-weight yarn (I haven't done a formal wraps-per-inch count yet) and there are some thick and thin parts, but I'm very pleased. It's undyed BFL, approximately 30 yards, and thankfully well balanced. It won't knit up to much, maybe just a fun, fluffy edging; I have a feeling I'll just want to keep it in a skein and admire it.

If that's not enough yarn pr0n for you, how about the latest STR? It came Saturday; in my excitement over my wheel, I completely forgot that it had been shipped out, so it really came as a surprise. I love the colorway, and I'm especially enamored of the pattern that came with it. I just need to finish up the really boring socks (read: 2x2 rib) for The Mister that are currently on the needles before I can cast on.

On a side note, I just did a big load of handknit socks, and I feel it is my duty to let you know that my Jitterbug socks are still bleeding when I wash them. The wash water is every bit as turquoise as it was on the first wash, too. I'll let you decide whether or not to invest in Jitterbug for yourself, but I most definitely will not be buying it ever again.
Posted by Sarah at 7:36 PM