Does This Make You Dizzy?

This was finished and blocked earlier in the week, but I'm only now getting around to blogging it (sorry I couldn't get a shot in better lighting). 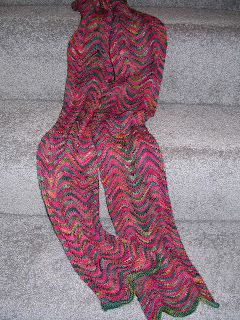 This scarf has a special place in my heart, because it was knit with the very first Koigu I ever bought. I kept saving it for a special project but could never bring myself to make socks out of it because I thought they would wear out too quickly. As it turned out, the colorways work very well together, even if they do look a bit like a psychedelic watermelon. 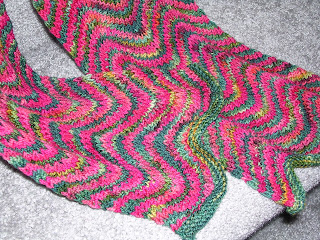 I'm a bit skeptical about the yardage specified in the pattern, which calls for Koigu and a size 5 needle. Supposedly two skeins would yield me a scarf roughly six feet long; somehow, with at least half a skein left of each colorway, I've got a scarf that's at least that length, and I didn't vigorously block. Not that I'm complaining, mind you. I have plenty of things in mind for that leftover yarn.


Last night was knit night with the Hurricane Knitters, who were all incredulous when an announcement came over the loudspeaker that B&N would be closing at 9 -- that's an hour earlier than the store used to close. At least the knitty company was good while it lasted (I suggest you visit Yvonne and Amy for some snippets of conversation and more details on what ensued after we were so unceremoniously kicked out) and I got some good knitting time in. I was able to cast on for the pattern I'm test knitting for Knotions, a new online knitting magazine. It's a top-down raglan, and I'm happy to say that I'll be able to share my progress with you! Right now it doesn't look like much, hence the lack of picture, but from the description and diagram it looks like it's going to be super cute.

Still no sign of my wheel, nor has there been any response to my e-mail asking for a tracking number. At what point do you think I'm allowed to get annoyed?
Posted by Sarah at 8:05 PM