For those of you not so into the spinning content, would you like a return to the knitting? Here's my latest offering -- my new favorite socks: 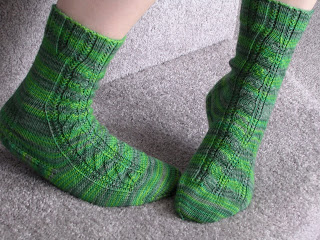 There are so many reasons why I love these socks. The fact that they're STR (squishy!) and green -- apparently my color of the year -- is a given. What really made these a fun knit, however, is the construction. The way these socks are made is very original and different, yet it works.

The stitch pattern is in a strip down the top of the instep. It's one that's easily memorizable, and the fact that it's worked over relatively few stitches (roughly a third of the total stitches) makes the sock go a lot faster. What I really liked about it was that the increases are lifted increases, which means that, instead of lifting the bar between stitches to create a new stitch, you instead lift the leg of the stitch one or two rows down (depending on the way the new stitch will lean) and knit into it. 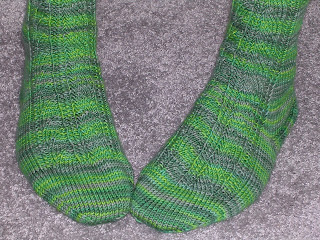 The coolest part of the sock, however, at least in my opinion, is how the gusset and heel are worked. It's entirely opposite of usual cuff-down sock construction. You see, the gussets are created before the heel is turned. The section of stitches on either side of the patterned panel is gradually increased, increasing the total stitch count by 50 percent, while the traditional slip-stitch pattern is worked over heel stitches on the back. The heel is then turned using short rows over those heel stitches, and finally the heel flap is worked in the slip-stitch pattern working back and forth along the bottom of the heel. At the end of each row of the heel flap, a heel stitch is worked together with a gusset stitch, thereby connecting the heel flap to the rest of the sock and working away the extra stitches. The result is a cushion all the way down the length of the heel that hugs the foot nicely and has extra reinforcement where it's most often needed. And the best part? No holes at the top of the gusset to sew up after the sock is done!

There's a fair amount of yarn left over, so I see another pair of baby bootees in my future.

Now, for those of you wondering what my singles from the other night turned into: 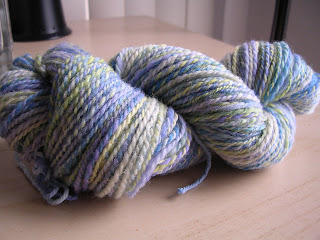 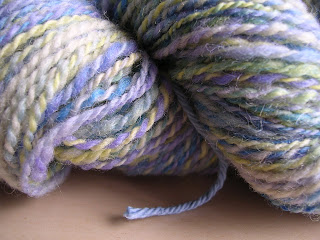