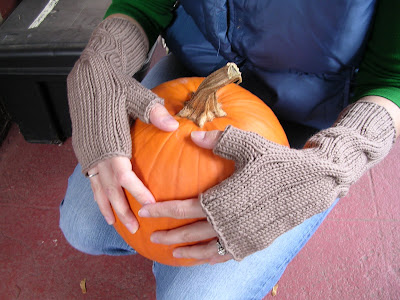 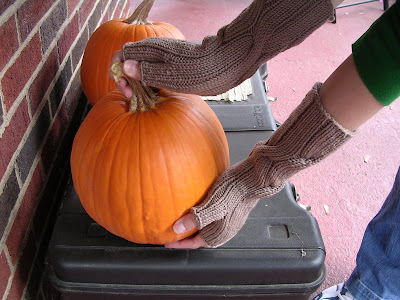 These were a quick, satisfying knit. I had to wait until several days after they were completed to do a proper photo shoot, but they knit up in just a handful of evening knitting sessions.

The yarn was a delight. It had been sitting in the stash for quite some time, waiting for the right project. When I asked The Mister for guidance on color choice for his mother, he suggested a neutral shade, so this Aurora 8 fit the bill perfectly. I omitted a few rows here and there in part because I was nervous about running out of yarn (probably wouldn't have been a problem in the end) but also because my mother-in-law has small-ish hands, like me, and I didn't want the mitts to be too long. I tried them on as I went, and as you can see, they're a perfect fit on me. The Mister says she'll love them, so I'm happy. Just a little steam blocking is left and they're ready to go.

I finished some other holiday knitting this weekend, but you'll have to wait until at least tomorrow to see it; it's still drying. Trust me, it's worth it. I'm thrilled.