So, I'm back. The Mister and I were away for the weekend in Deep Creek, Md., so he could do a little skiing. I do not ski (I've tried, and it doesn't agree with me), so I was happy to curl up with my knitting and watch some TV. I managed to get the entire sleeve of his Big Thaw Pullover done before we left to come home. 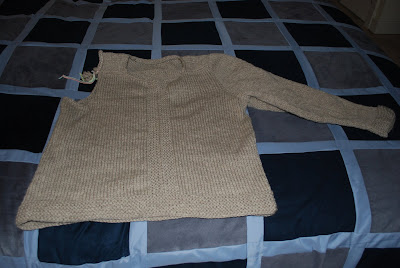 Unfortunately, it looks like this sweater is going the way of the Cambridge Jacket in its sleeve size. I'm beginning to think that men's patterns are written assuming a much more muscular build than my husband has. Perhaps those roomy arms are meant to be filled by large biceps? The Mister said he didn't mind the roomy arms so long as both arms are equally roomy, and I think it will work out okay as this sweater has a sweatshirt-y feel to it, but I think I'll stick with Elizabeth Zimmermann sweaters from now on.

We were home in plenty of time to watch the Super Bowl; thankfully we stayed home, so I didn't have to scramble to get things together for a party. Needless to say, we were quite thrilled with the result of the game, though I could have done without the anxiety at the end of the fourth quarter. I did finish the second of my game-day dishcloths (knit entirely during the playoff games and the Super Bowl) just before the end of the game, and I'm thankful that I wasn't working on a fitted garment, because I'm pretty sure my gauge was affected by all the excitement.

I took a vacation day from work yesterday, in part because I knew I'd be up late Sunday night but also because I needed a day to get some things done that I normally do on the weekends. Fortuitously, having the day off also allowed me to run over to Natural Stitches when it opened and sign up for Franklin's lace class. I know that I am already fairly experienced lace knitter, but I've never taken a real knitting class, so I thought it would be fun. It's also right before my birthday, so I'm considering it my birthday gift to myself. Plus, it's Franklin!

Once I got that and a couple other errands done, I returned home to spend the rest of the day in fibery pursuits. First, first I spun for a few hours while watching Juno on HBO, then I picked up my knitting and finished watching a disc of the first season of The West Wing. The knitting accomplishment for the day was finishing up Renata's socks: 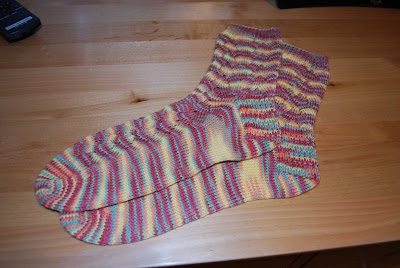 These, along with a fair amount of leftover yarn, will be delivered to Renata, weather permitting, at tomorrow night's meeting of the Hurricane Knitters (7 p.m., Waterworks Barnes & Noble).


*As if it weren't enough that our mayor already changed his name to Luke Steelerstahl, apparently we now live in Sixburgh, PA.
Posted by Sarah at 8:25 PM