Those of you who know me know that I'm usually a fast knitter; even the most complex of projects have never taken me more than a few months. So it may come as a surprise to some of you that this project was on the needles as long as it was. Nevertheless, it's now complete. 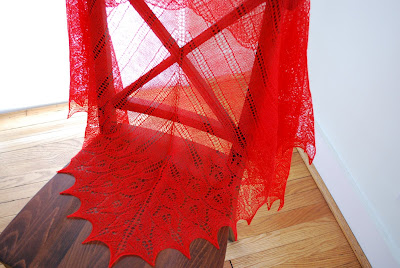 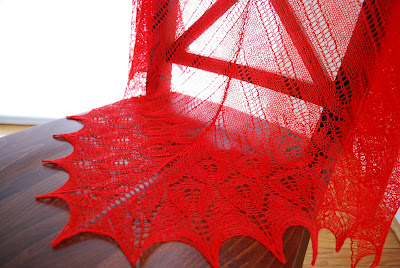 Yes, you read that right: This shawl was started in the summer of 2007. In fact, this shawl was on the needles longer than The Mister and I have been married! I'm sure the fact that I started it shortly before the wedding had something to do with my abandoning it for a long period of time; I suspect the monotony of the main body of the shawl played a role, too. Lately, though, I started feeling guilty that so many other lace items had been started and completed while this project languished in a bag in my stash, so I resolved to finish my Icarus before casting on for another lace shawl. 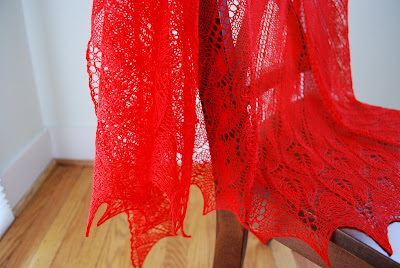 As a further reference of how old this project is, the yarn was purchased from Pittsburgh Knit & Bead, a local store that went out of business several years ago. I used about 1,000 yards of the rather generous skein (1,375 yds./100 g) for the completed shawl and the first attempt, which was scrapped when I came across a spot in the yarn where one of the two plies was completely severed. 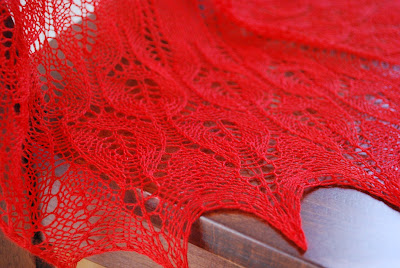 The pattern itself, once I got past the seemingly endless repetition of the first chart, was quite fun. The later charts were a bit more challenging than lace charts I'd encountered in the past, as some WS rows involved both knits and purls, so I had to pay a bit more attention. And, with the final rows containing 500+ stitches, each row certainly took a bit of time. 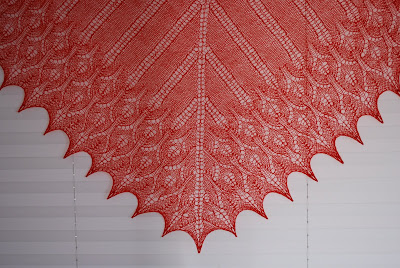 Overall, I'm in love with the results. The very thin yarn (I'm not sure if it qualifies as a cobweb weight, but it's close) resulted in a delightfully airy shawl. It was surprisingly resilient when it was blocked -- despite my concerns about its strength, I was able to block the finished shawl with my usual level of severity. 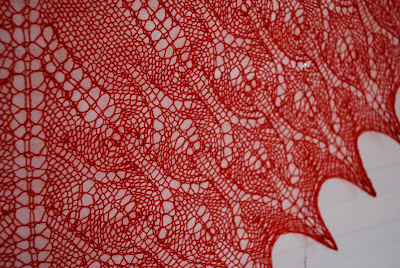 And, perhaps most importantly, it's done. I think I can confidently say that never again will I take more than a year and a half to finish a shawl.
Posted by Sarah at 7:39 PM