I have a finished sweater, and it fits! 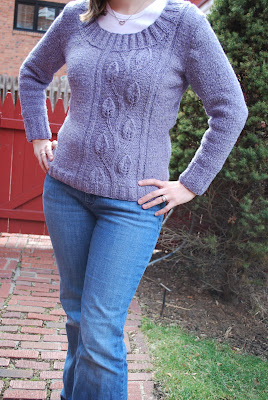 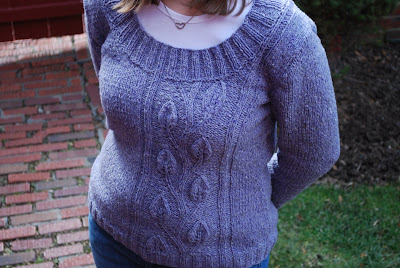 This sweater was a true experiment. I went down a needle size and still didn't get gauge but determined that going down two needle sizes would have resulted in a stiff fabric. So I measured my swatch, did a few calculations, and figured out that knitting the 34 1/2" size should end up in a sweater to fit the measurements of the 38" size, which is what I wanted. As you can see, it did work out in the end, and the sweater fits just as I wanted it to, but I had to make a couple of adjustments. 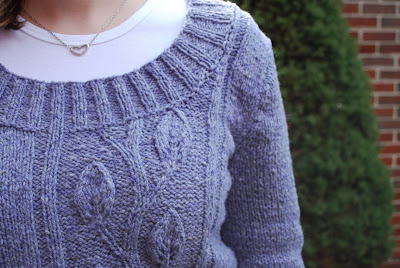 Because I had fewer stitches per inch and fewer rows per inch, I ran into some difficulties when working the top part of the front. I had to work more rows to reach the desired length for the front, meaning I was further along in the lace panel than I would have been had I gotten gauge, so I had to fudge the neckline shaping. Then, the sections of the front on either side of the neck were narrower than they should have been -- the sweater was actually falling off my shoulders when I tried it on before picking up for the neckband -- so I added some more length to that ribbing to compensate.

I only realized midway through the sleeves that, as written, they would only be about 3/4 length. I didn't want shorter sleeves for this particular sweater, so I added an additional two inches or so of length to make them full length. 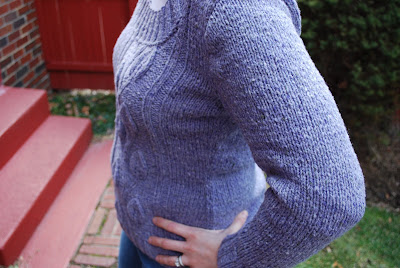 Finishing this sweater was much easier than I was expecting, and, in fact, I finished seaming everything in one evening. The sleeves in particular were the easiest I've ever set in. I picked up less stitches for the neckband than called for because of my gauge issues; I just made sure I had a multiple of four that filled the space adequately and went with it.

As to the yarn, I quite liked working with it, although I did encounter a fair amount of VM. I do love the rustic, nubby look it has, and after wearing this sweater all day on Saturday, I can attest to its warmth. My 10 skeins were enough to knit the entire sweater, including two gauge swatches, with enough left over for a hat or maybe a pair of fingerless mitts.

The Mister has declared this my Best Sweater Yet, and I'm inclined to agree with him. I got many compliments on it throughout the day from knitters and nonknitters alike, including one you might recognize: 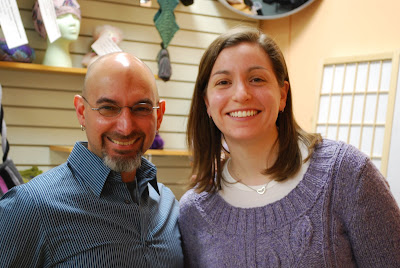