I skipped my Spinning Sunday post last week because the last of my Tour de Fleece yarns were at my LYS, waiting to be judged for the summer spinning contest. They're now back in my stash, so I can show them to you.

The first was spun from a set of three mystery batts -- I say "mystery" because their contents were unknown. They came to be from a friend who got them from another friend, so there was really no way of finding out what fibers were in them. I suspect wool of some sort (not a particularly soft wool, either) and something like firestar or angelina, because they had a little sparkle to them. They were not particularly fun to spin, as they were sticky (lanolin, perhaps?) and neppy. I had about 3.25 ounces when I started, though I lost a little of that weight from all the nepps I pulled out while spinning. In spite of this experience, I quite like the finished yarn. 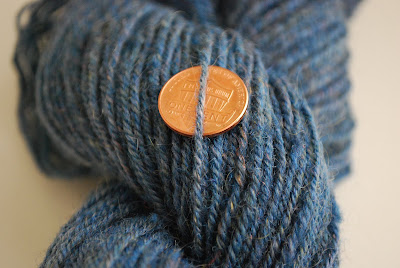 The other yarn is one I'm very proud of. It stared out as 4 oz. of mixed Corriedale from Gale's Art that I bought at MDSW -- mainly because it was inexpensive and I wanted something that was nice but not too nice to break in my Bosworth spindle. I ended up spinning all 4 oz. on that spindle and then plied it on that gigantic Louet beginner's spindle. Toward the end there was so much on the plying spindle and it was getting so heavy and unwieldy, I had to wind the rest of the yarn off the plying ball and onto a TP roll so I could ply the rest from the other end with the Bosworth. I did manage to get it all plied in one skein, though. (The small skein you see in front here is extra singles from half of the fiber that I wound into a center-pull ball and plied from both ends.) 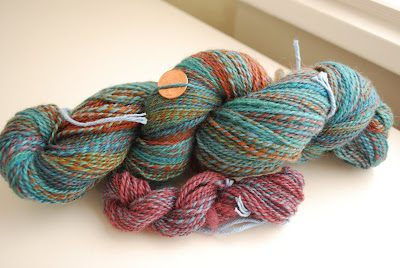