There's roughly a week and a half left in the summer contest at my LYS, so I am still spending my evenings spinning and trying to get as much done as possible by then. A little bit of knitting has been creeping in from time to time, however. The past couple of Saturdays when I've gone to Natural Stitches (as I do most Saturday afternoons), I've been working on the Rainbow Chain Carriage Blanket that I'm knitting for a baby due in December. I'm following Courtney's mods, however, and making much wider color stripes with only three colors (three shades of blue, to be exact). 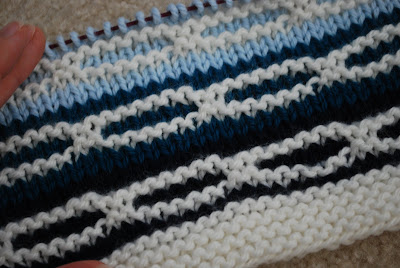 The mother-to-be requested a blue blanket, so I'm thinking this will fit the bill. I'm using Berocco Vintage (again copying Courtney's blanket), a 50% acrylic/40% wool/10% nylon blend, in Mochi, Dark Denim, Bilberry, and Misty. I am planning for 18 stripes total at the point but may add more if it needs more length. The knitting is a bit fussy because I have three skeins attached at any given time (one for right border, one for the stripe in the middle, and one for the left border), so I'm spending a fair amount of time detangling and rearranging skeins as I go, but it's going to be really stunning when it's done. I started it now figuring that I can do a stripe or two at a time at a leisurely pace and still have it done in time for the baby's arrival.

Really, baby knitting is mostly what I'm going to be doing for the rest of the year. I balled up a skein of STR Mediumweight on Monday night in preparation for casting on for a Baby Surprise Jacket for one of my coworkers. She is not finding out the sex of the baby, so I though it this was a fairly gender-neutral colorway (it's Muddy Autumn Rainbow from the sock club two years ago). 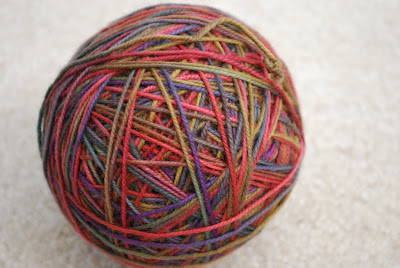 I'm planning on knitting up this BSJ pretty much exactly like I did Rainbow's, with I-cord edging and button loops. I know that it fit Rainbow as a newborn (although it was a tad large on her for going home from the hospital), and as this baby is due December 10, he/she should be able to get good wear out of it during those first few months.

I have a list of other baby projects in my head as well for the coming months -- a sweater for the other December baby (perhaps in handspun), a blanket and sweater for a little girl coming in January, and something for a baby due in March (though I'm waiting until the parents find out the sex). I'm still using my lunch break knitting to work on design stuff, and at some point I'm going to have to get back to my Essential Cardigan and finish it. I guess my hiatus from knitting (in favor of spinning) is officially over!
Posted by Sarah at 7:35 PM