The Unbearable Lightness of Romney

I finished another yarn late last week that qualifies for the summer contest. This was the July shipment for the Crown Mountain Farms fiber club (so I'm only a little behind!), Romney in a gorgeous colorway called the Unbearable Lightness of Being. I was so excited to spin it that I neglected to snap a picture of the fiber before I started spinning, but it reminded me very much of chocolate covered cherries. I spun up the two bobbins of singles on my Lendrum (surprisingly quickly, I might add) and plied on my miniSpinner. 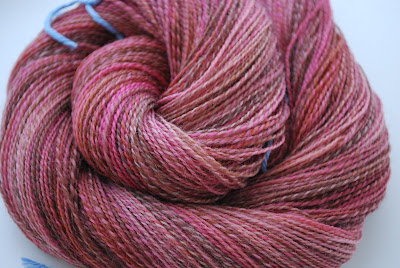 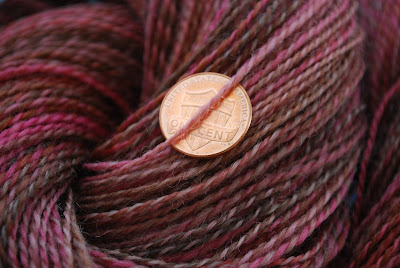 It's very pretty, but it's not as soft as I was hoping it would be. I'm wondering if it's something about the dye that makes it a little rough, because my Romney fleece is much softer, though of course it could vary by sheep.

I now have two weeks left to spin for the contest and have two projects in progress that I'm determined to finish. First, 8 oz. of beautiful moorit (that's the name for the light milk chocolatey color) Shetland top from Louet that I bought at the store and is destined to be a three ply. I'm on the third and final bobbin of singles now and am hoping to have it finished up by tomorrow night so I can start plying on Tuesday. 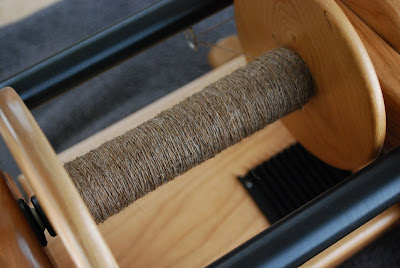 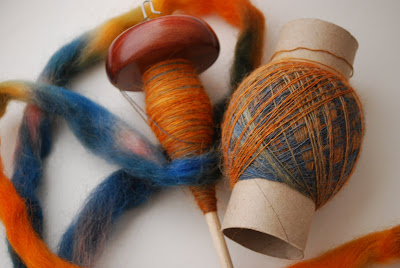 What you see here is the first half of the fiber. I was hoping to get all 2 oz. on the spindle at once, but my cop started falling about on me and I had to wind off. I'm going to focus on my winding a little more on the second half and attempt to get it all in one cop. This'll be plied on the wheel, though, because my wrists just can't stand the idea of using that giant plying spindle again!
Posted by Sarah at 8:01 PM