I know I've been promising to show you this sweater for some time now, so please forgive the wait. I hope you'll think it's worth it, because I think this may just be the best sweater I've ever knit. 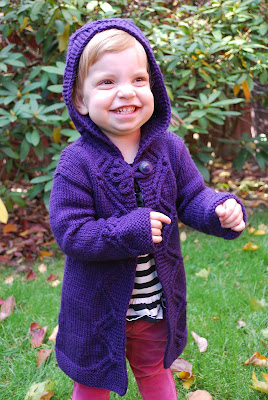 This sweater was such fun to knit. The time span is a bit misleading, because I was working on this in between several other projects. The actual knitting time was pretty reasonable. I did the back first and it took the longest mainly because it took the course of knitting the back to get used to reading the charts (I'm usually a very pro-chart person, but when there's garter stitch and stockinette in the same chart, it takes my brain some time to get used to it). The fronts took maybe three evenings total to knit, and I knit the sleeves at the same time over the course of a weekend. The hood was the last piece, and it probably took me just a few hours, with about an hour or two to graft the top and seam the rest of the sweater. Had I been working on this project exclusively, I probably could have finished it in a couple of weeks. 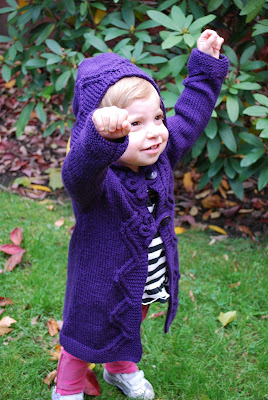 My only really big mod to this pattern was in gauge. When I swatched, I discovered that I probably would have had to go up to a US 9 to get gauge, and, in my opinion, the resulting fabric would have been way to loose for this yarn. Moreover, I really liked the fabric I was getting on size 7 needles, which was about 18 stitches over 4 inches, or about half a stitch more per inch than specified. With Rainbow's chest measurement of 20.5 inches, I would have normally chosen to knit the 22" size; with my difference in gauge, however, I elected to knit the 26" size knowing it would come out smaller than that. I knew I could also count on the tendency of a superwash yarn to stretch if I needed to get some additional room in the sweater when it was done. As it happens, after blocking, the sweater fits perfectly. There's a little bit of room so she can layer a shirt underneath as well as grow a bit, but it's not so big that it overpowers her.

The other mod was in the closures. I really wanted to be able to throw the whole sweater in the wash, so I was worried about using the leather closures specified in the pattern (not to mention that I wasn't sure I would be able to source the materials necessary). I'd seen several projects on Ravelry that used a twisty I-cord loop with a decorative ending instead, so I decided this was the way to go. I made two 12" lengths of I-cord and sewed the ends into place, leaving a loop for buttons. I'd originally intended to use toggles, but on a trip to my LYS, Rainbow herself found these purple buttons that were amazingly a match for the sweater. (I really have to remember to take her from now on when I go button shopping, because I'd missed seeing those same buttons when I'd looked on my own a couple of days earlier!)


As to my overall assessment of the pattern? It's a winner. I had made sure to find the errata for the pattern before I started but, to my surprise and delight, they'd already been corrected in the download. The pattern was easy to follow and very clearly worded, and the sweater itself was relatively easy to execute (simple shaping, not lots of "at the same time"s, etc.). The cables are clever but very intuitive, so once you've done a couple of pieces, you know what to expect. If I have one complaint, it's about the number of charts that are used. I realize this probably couldn't be helped, as different charts are needed for each piece, but it made things a little annoying at times when I had to find a place to spread the charts around me so I could see it all. I did get a little confused from time to time when working on the hood, as it seemed to me that the two charts should have been on opposite sides of the page, but I think that was just another brain adjustment thing, because I had it straight by the time I was about halfway through the hood. I was very thankful that the charts were fairly large, because by the end of the day my eyes aren't always so good.

As you can tell from the pictures, Rainbow was completely thrilled with her sweater. "Puhple" is her favorite color at the moment, so she was very excited to put it on. She wore it out and about all day last Saturday, when there was just a little chill in the air and a little extra something was needed. I have a feeling she's going to want to wear it a lot in the weeks to come, and that is certainly the biggest compliments I could get as a knitter.