You've all heard me talk about this cardigan for so long that I'm sure it'll come as a surprise to some of you that I haven't yet shown you the fully finished item. I've been procrastinating about it, but today that comes to an end. 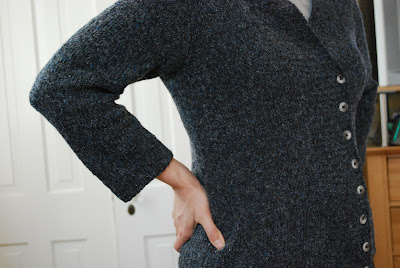 I decided to knit this cardigan primarily because it seemed like the simple, classic sweater that I always reach for -- it goes with almost everything, always looks good, and is an easy knit. Unfortunately, that simplicity does not always make for a good project. The pattern itself was very clear and easy to follow, and I found no errors, but I discovered that I had a really hard time sticking with this project. Stockinette the round I can do forever, but stockinette worked flat can bore me to tears sometimes. The big issue, though, seemed to be the 1x1 garter ribbing. It was so tedious, especially when I got to the collar/buttonbands and had to work a couple hundred stitches in 1x1 rib every other row. I think that last piece took me as long to knit as the five component pieces did.

That said, the finished sweater is as I had hoped. It fits well, it's comfortable, and it fits with my wardrobe. I've already worn it a couple of times when the weather was such that I needed just a little extra layer. This is by no means a winter sweater, but it's great for these early days of fall and will be great in those early days of spring when we're all sick of thick wool sweaters and heavy winter coats.

The only modification I made (and really a slight one at that) involves the stitches at the back of the neck that are left when the shoulder stitches are bound off. The pattern calls for keeping those stitches live and placing them on waste yarn. However, I knew that I would be picking up stitches for the button bands (which are worked in conjunction with the collar) and I wanted all the stitches in that first row to look the same, so I bound the back neck stitches off at the end of the back piece. 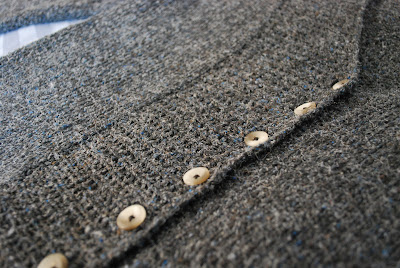 If there's one disappointment I have about this sweater, it's the yarn. I picked it mainly because it was the right weight and I had a ton of it in my stash from a good WEBS sale years ago (and thus I felt guilty that I hadn't used it yet), but I don't think it's the best fit for this pattern. The high silk and rayon content means that the knit fabric is very drapey, and in the case of my sweater, that means that it's stretching out of shape a bit as I wear it, particularly around the buttonholes (I might have to go in and reinforce them at some point because of this). The drape factor is not entirely an issue, as it makes for a really comfy sweater, but I was getting a little annoyed when I wore it to work last week and kept noticing every time I went to the bathroom that my set-in sleeve cap was sitting in the middle of my bicep. I doubt anyone notices this kind of thing but me, and as no one asked me if I'd made the sweater at work (where they know I knit my own sweaters), I'd say it's probably not an obvious flaw. The other issue with the yarn is the color; I think the tweedy flecks, though I love them in the yarn, obscure the ribbing a bit, and for all the aggravation that ribbing caused me, I want it to be seen.

I guess this sweater is a good exercise in the process. I ended up with a garment that fits well, but in retrospect, I would change a number of things. I should also add that I was a good girl and did several swatches, and while the swatches themselves were drapey, they in no way could have prepared me for how drapey the full finished garment is. Live and learn, I suppose. At least I've come a long way since my first sweater.
Posted by Sarah at 7:45 PM