A Study in Stripes

It took about six weeks, but it's done! 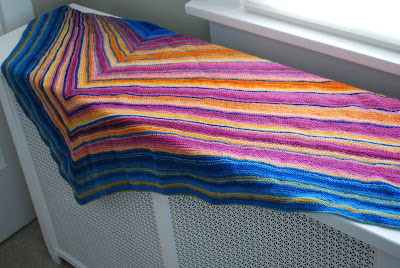 If you're on Ravelry with any regularity and look at the patterns that are available, chances are you've seen this pattern -- as of this writing, there are 2,275 projects logged on Ravelry. I'd had it in my favorites for some time before I finally got around to buying the pattern a couple of month ago. I knew I wanted to use these two yarns for it as soon as I finished the second skein during last year's Tour de Fleece and discovered that the two skeins had nearly identical yardage (not to mention that they both shared that beautiful goldfish color!).

The pattern is actually very simple but also very clever. It starts as a typical top-down triangle shawl, but it quickly becomes asymmetrical through the use of short rows. In essence, you work increasingly longer sections of each stripe at a time, adding more stitches each short row, until you're back at the beginning. It's quite smart, I think, and because of the way it's constructed, it's very easy to add or subtract stripes to accommodate your yarn supply. In my case, I tried to add two additional stripes (for a total of 14), but discovered that my GWAT was going to run out before I finished the full last stripe (I needed five more short rows to finish it), so I just knit to the end of the row. That means my 14th stripe is a little uneven, but frankly I don't think you can tell. 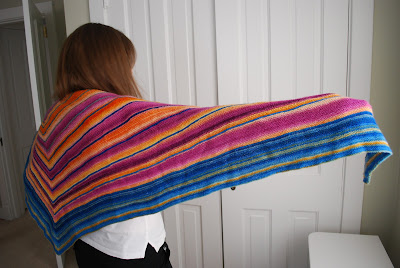 You might think that after spending six weeks on this shawl I'd be sick of garter stitch, but apparently I'm not, because I bought the pattern for Color "Affliction" (as my friend Anna has named it) today. There is lots of garter stitch in my future!
Posted by Sarah at 8:12 PM