As of this afternoon, I am two-thirds of the way through spinning my SPAKAL singles. I've moved on to the second colorway (this one is called One) and seem to be getting through it faster than I did the first colorway. 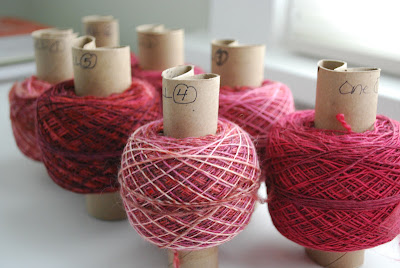 In addition to the seven bobbins' worth you see here, I finished up an eighth bobbin this afternoon in between washing up a couple loads of fleece, and as soon as this entry goes up, I'll be working on bobbin number 9. Ideally, I'll like to get the rest of the singles spun up by the end of this week, which does seem a realistic goal considering that I'll be off Thursday and Friday (Rainbow's daycare is closed in preparation for the start of the school year the following week) and can spin during nap time. It would be really great if I could spend the long weekend plying!
Posted by Sarah at 8:47 PM