This Is the Crazy Talking

Right before the start of the Tour de Fleece, I did something most of you will probably think is crazy: I cast on for a sweater knit in laceweight yarn.

I'm quite used to working with small-diameter yarns, so it's not necessarily the weight of the yarn that was so crazy -- just the idea that I'd cast on the sweater and actually finish it in time to wear it while it's still seasonally appropriate.

The yarn is question is my own handspun, a Polwarth/silk blend from All Spun Up fiber. It took a good two months to spin and ply all 8 oz. of it, so already I have that amount of time invested in this sweater.

The pattern is Hannah Fettig's Breezy Cardigan, a lightweight version of her Effortless Cardigan, which is one of my favorite hand-knit sweaters. As sweater patterns go, it's pretty darned easy. It's a top-down stockinette raglan with a bit of ribbing at the ends. In the first month or so after casting on, I got through only the raglan increases on the yoke. Since this weekend, however, I've made remarkably fast progress:


I'm just about at the point where I need to do my second round (of three) waist decreases, which means I've knit almost four inches of the body under the underarms. It feels like I haven't done that much knitting (I've done a fair bit of spinning, too, the past couple of days), so perhaps this will get finished up sooner than I think! At the very least, this has been a good project to turn to when I have little physical and almost zero mental energy, because I don't really have to think to do stockinette.

In completely unrelated news, I don't think I mentioned that I got a nice surprise when I spent the day at my LYS about a week and a half ago. I'd been entered into a special drawing for completing a bingo in their summer contest in July and won a bonus prize, this sweater kit from Cascade! 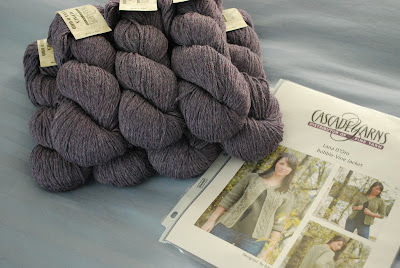 The yarn is Alpaca Lana D'oro, a 50% alpaca/50% wool blend. There's a pattern that came with the yarn that's kind of cute, though I'm not sure I want it for this yarn. If I did make my size, though, I'd have enough yarn leftover to make a sort-of-matching sweater for Rainbow. Decisions, decisions!
Posted by Sarah at 8:13 PM