Sweater in a Jiffy

I love baby knits, especially the really tiny ones. While they can sometimes be more fiddly than their adult-sized counterparts, they're so fast that you really don't notice.

Case in point: this super-cute sweater that I whipped up in a matter of days: 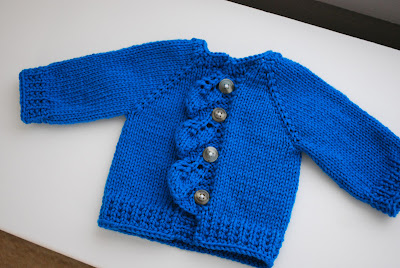 This sweater is for one of the Mister's coworkers, whose expecting her first child, a girl, early this fall. I'd thrown three skeins of the yarn into a Knit Picks order a while back to get bumped up to free shipping, and I thought this bright blue would be perfect for a newborn (I much prefer babies in bright colors over pastels, especially having experienced a jaundiced baby!).

This cardigan is a top-down cardigan and so entirely seamless, which added greatly to the speed of the project. I also decreased the number of ends to be woven in by keeping the last stitch of the bottom live after binding off, turning the work to pick up stitches for the button band (starting with that last live stitch), and then doing the same for the collar when the band was finished. The buttonhole band on the front is knit concurrently with the sweater and features those adorable leaves. 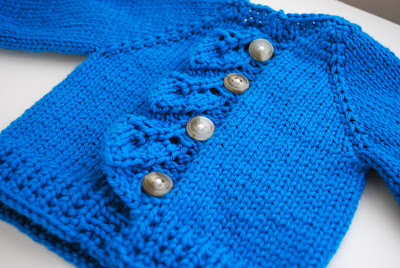 If you knit this, be aware that there is an error that has not been listed with the errata on the Ravelry pattern page (though you'll see mention of it if you look at the comments). The last leaf is meant to be finished off with alternate directions for what would be Row 12 of the pattern; the instructions, however, say to follow these directions for Row 13. If you do this, though, you will be on a wrong side row and not have enough stitches left in the placket to do what you're supposed to. This isn't a big thing, but I had to tink back a couple of rows to fix it. (At the time I thought it was just me, as I was taking some medication that had made me a little drowsy, but the comments on Ravelry proved it was not.)

This was a really fun little knit and one that I'm likely to do again when I need a quick gift. I might even make one for Rainbow in her size if she likes it!
Posted by Sarah at 8:52 PM