I am so close to a finished sweater I can taste it.

The Mister is traveling for work for a couple of days, so my knitting time in the evening is determined strictly by when Rainbow falls asleep (because most nights I have to sit with her until she does). On Sunday, she passed out at 8 on the dot, which was perfect because it allowed me to see the Call the Midwife finale in real time and get in a solid two hours of knitting. Last night, however, she tossed and turned until 9, which meant I didn't make as much progress as I'd hoped. Still, I'm in a good place. I bound off the neckline, grafted the underarms, and wove in all the ends except for the one from the neck (which I'll bury in the button band on that side). Before shoving it in its project bag for the night, I tried it on, and it looks like it'll fit perfectly once it's blocked. Given that my gauge was off and I knit a smaller size to compensate, that's a big relief. 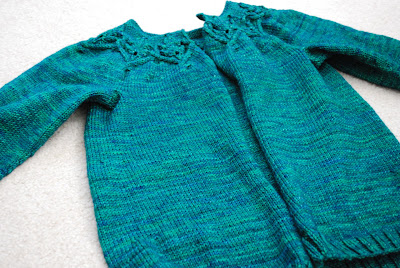 Tonight, the mission is to finish at least one button band. If she cooperates and goes to sleep earlier than last night, I might even get started on the second. If all goes well, I could have a finished sweater by tomorrow night, which would be just fabulous. 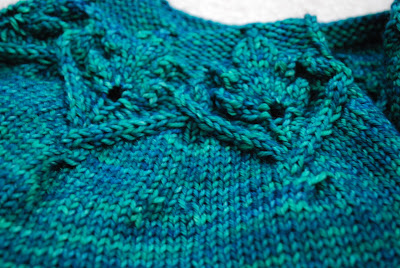 I'm also making some steady progress on my socks. I finished the heel turn and short-row section at lunch yesterday and am cruising down through the foot. 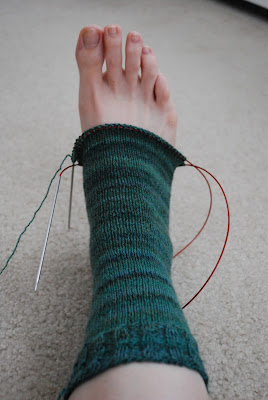 I'm anxious to get this one done not because I want to wear it (it feels like the middle of July here right now!) but because I have a sock design idea percolating and I want to get to swatching. And it goes without saying that I'd like to knit something in a color that isn't green for a change!
Posted by Sarah at 9:00 PM