Over the weekend, I came to a realization about my knitting. Though it was unintentional, it seems I have been color-coordinating all my projects. If you recall, the last two things off the needles (my Vitamin D and my Rubus suberectus Socks) were both gray. Now, it seems, everything must be green.

For starters, there's my Mad May sweater -- Alana Dakos's Gnarled Oak Cardigan -- which I'm knitting in tosh DK in Forestry, a deep, glowing green with a hint of blue. 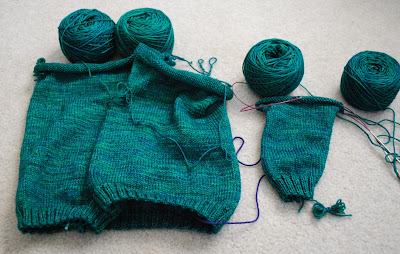 I made very good progress on this over the weekend, as I was able to work on it in the car and in the hotel room both Friday and Saturday evening. I finished the body on Monday and started on the first sleeve, which is moving along a little slower than I was expecting (but I guess having two skeins of yarn attached and having to move them around regularly does slow one down).

Then, there are the socks, which are being knit out of my own handspun -- also in shades of green. 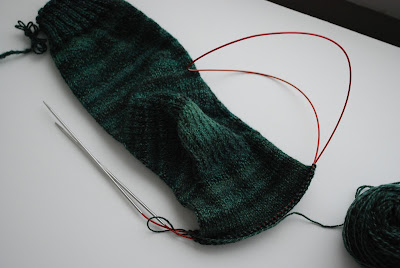 These saw some action over the weekend as well (I took them to the festival to work on while waiting in line or sitting and taking a break). I turned the heel on Saturday evening and now they are well on their way down the foot. I expect I'll have the first sock finished soon.

As if that wasn't enough green, there's my spinning. 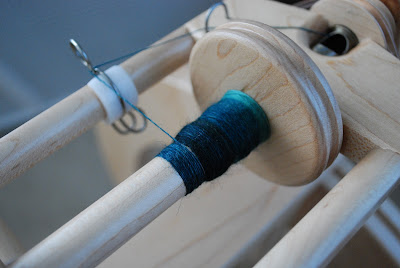 If this looks familiar, it's because I'm spinning up the rest of the fiber that I used for the sock yarn. It's Corriedale pencil roving from Crown Mountain Farms in the colorway Eire. This batch is being spun into a 2x2 cabled yarn; this bobbin is number three of four, each holding about an ounce of fiber.

So it seems spring has arrived everywhere, even in my yarn and fiber choices. I wonder what next month's color theme will be!
Posted by Sarah at 6:03 PM